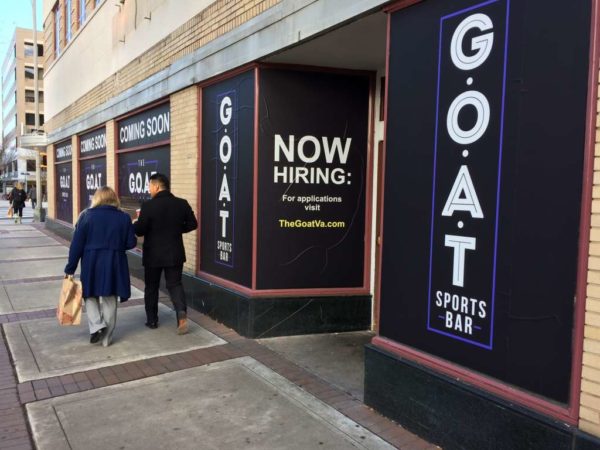 We now know a bit more about The G.O.A.T., the new sports bar and lounge that’s coming to the former Hard Times Cafe space in Clarendon.

The bar is expected to open in June. The 8,800 square foot space is being completely remodeled and will seat “350 guests between three full bars and full service tables.”

The group behind A-Town Bar and Grill, Don Tito and other popular Arlington hangouts has signed a 20-year lease for the space, at 3028 Wilson Blvd.

A new press release, below, says The G.O.A.T. will “transition from a traditional sports bar to a chic and relaxed evening lounge” and will feature “daily deals, late night menus and live entertainment” among its rotating specials.

Mike Cordero is bringing the “greatest of all time” in food and drinks to Clarendon this summer. Set to open in June 2017, The G.O.A.T. will take over 3028 Wilson Boulevard, which formerly housed the Hard Times Café, and transform the current floor and kitchen layout to maximize the seating in the 8,800-square-foot restaurant space. Cordero’s MacNac Hospitality signed a 20-year lease agreement with property owner VA Properties LLC. will work on the build out and remodeling of the kitchen, ground level and second floor, and Yvette Irene Design will develop the interior décor.

The G.O.A.T. will serve gourmet American comfort food and beverages. All the menu’s recipes will feature locally sourced ingredients and homemade marinades and sauces. There will be an emphasis on craft cocktails and beers supplied from area microbreweries.

“Our mission is to offer simple yet delicious food, a variety of drinks and a relaxing environment to lounge in,” said Mike Cordero, Executive Chef and President of MacNac Hospitality. “The G.O.A.T. will be an inviting sports bar that can be enjoyed beyond game day.”

Designed with extended hours for lounging in mind, The G.O.A.T. will transition from a traditional sports bar to a chic and relaxed evening lounge. Daily deals, late night menus and live entertainment will be a regular part of The G.O.A.T.’s rotating specials.

The redesigned restaurant will seat 350 guests between three full bars and full service tables. The 200-person dining room will have a mix of high tops and long banquette style tables. The bar stools and high top table chairs will feature plush cushions and foot rests to make seating for extended periods most comfortable. To ensure all seats are “the best seat in the house,” The G.O.A.T. will feature three large viewing walls. Each wall will be entirely comprised of individual TV monitors that together display one single televised event to maximize the overall viewing potential from each table. Separate from the main floor, The G.O.A.T. will house a private function room equipped with its own bar, several TV monitors, and seating for 25.