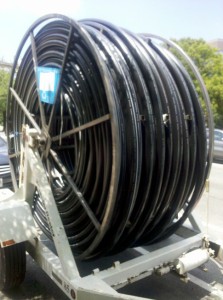 Monday marked a milestone for the county’s multimillion dollar ConnectArlington fiber optic network: It has completed phase one of migrating Arlington Public Schools to the system and off of Comcast’s internet access.

But as APS prepares to enter phase two of the migration, it also has an open request for proposals (RFP) to build another fiber network, a potentially pricey project that it says is a “contingency plan.”

With phase one complete, 14 APS sites are now on the ConnectArlington network. Another 23 are expected be online by December.

Early last month, however, APS issued an RFP for a contractor to build a new fiber network for the school system. Proposals originally were due Monday, but the deadline has been extended to January 17. APS is supposed to choose a contractor for the project “as soon after that date as possible,” according to an addendum to the RFP. The RFP states that the new network must be constructed and functioning by April 2018.

APS says the additional fiber network is a contingency plan and ConnectArlington still will be its primary network. Therefore, APS will continue moving forward as planned with getting the next bunch of sites online with ConnectArlington by year’s end.

“APS is contracting for a backup system to remain in place until we know that ConnectArlington is complete and fully functional. With all of our instructional, testing, business functions and state reporting requirements, APS cannot risk not having a viable network infrastructure in place if ConnectArlington is delayed and not completed for any unforeseen reason,” said APS spokesman Frank Bellavia.

“Like the insurance policies we purchase to protect the investment in our buildings, buses and other critical components of APS operations, we hope we will never need the insurance, but those policies are in place — just in case,” said Linda Erdos, assistant superintendent for school and community relations

The county says that it cannot speak for APS’ desire for another fiber network but asserted that the ConnectArlington network has been performing for nearly two years without issue. 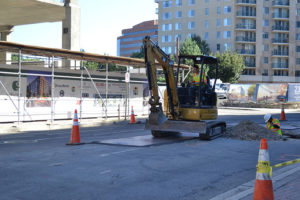 “We are completely confident that we will install fiber into every planned county and school facility by the end of calendar year 2017, based on our previous years’ experience with the construction and operation of this project,” said James Schwartz, deputy county manager for public safety and technology.

In addition to the 14 APS buildings and 33 county buildings on the network thus far, Schwartz said, more than 130 traffic signals have been connected. Plus, the public safety radio system — previously supported by microwave antenna — has been migrated to ConnectArlington and “is operating without a problem,” according to Schwartz.

“This system allows fire, EMS and police to communicate during emergencies and requires the highest reliability standard — that standard is being met by ConnectArlington,” he said.

APS spokespeople say the backup fiber network is eligible for federal E-Rate funds, which assist schools and libraries with obtaining affordable telecommunications and internet access. The Federal Communications Commission explains that the discount a school district receives depends on two factors: “(1) the poverty level of the population the applicant serves and (2) whether the applicant is located in a rural or urban area.”

“The RFP ensures that APS can receive a potential 50 percent reimbursement of [the backup fiber network] costs through the federal government’s E-Rate funds,” Bellavia said.

Because the RFP is still open, it’s unclear how much the contingency network will ultimately cost. But so far APS has spent just over $400,000 for the ConnectArlington project, according to APS assistant superintendent of finance and management services Leslie Peterson.

“The county indicates the budget to complete the initial [ConnectArlington] build-out for schools is $1.9 million and they expect to come in under budget,” she said.

“Fiber has huge value for public agencies, and this value will only grow with societal needs and the rise of smart-city and school applications, including to help kids at home,” Talbot said. “And when public networks are used to provide service to homes and businesses, it provides competition that tends to improve service quality and drive down prices for all.”

That reduced cost is one of the factors that prompted the county to pursue ConnectArlington in the first place.

“Had the county not built ConnectArlington, it could have been charged substantial annual costs to continue using the Comcast fiber network,” Schwartz said.

In 2015, the county approved a plan to expand ConnectArlington beyond government and to license the dark fiber to private businesses for economic development purposes. The construction of that portion of the network was completed in March 2016; testing and configuring continued through May 2016.

Thus far, no businesses have signed licenses for the service, but “we have connected Virginia Tech and the University of Maryland-Mid Atlantic Crossroads to provide for Internet2 and research, government and higher ed connectivity,” Helfer said. “And we are working with a number of interested parties from the business community whose requests for access are currently under review.”

The county plans to launch a marketing campaign for the private business service “in the coming months, one that we believe will help attract and retain businesses in Arlington,” Helfer said. “With our dark fiber in place, we are offering businesses a new choice for telecommunications.”