(Updated at 4:55 p.m.) A brewery in Shirlington is planning to celebrate its one-year anniversary with a special beer release. 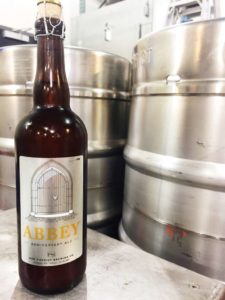 But the focal point of the festivities will be Saturday, when the brewery begins selling bottles of a spiced Belgian beer dubbed “Abbey Ale.” The beer is the first to be made and bottled in Arlington in nearly 100 years, Waigand said.

The limited-release beer is $11.99 per bottle, and each patron is limited to buying just two.

“We bottled them all by hand,” said Waigand. “Saturday was a very long day. We all needed a beer at the end of that one.”

The brewery will also hold a beer-themed trivia night later this evening, revive one of its most popular IPAs on Friday and sell growlers at a discount on Monday.

“It’s like a thank-you to our community,” Waigand said.