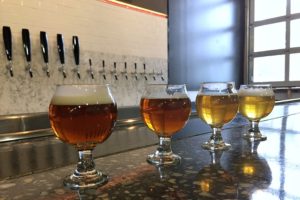 After first announcing its plans to open late last summer, a new brewery near Shirlington is ready to open its doors this weekend.

New District Brewing Co. (2709 S. Oakland Street) is scheduled to open to the public this Saturday, Jan. 9 at noon, according to co-owner Steve Katrivanos. The 5,200 square foot space is off S. Four Mile Run Drive near the Shirlington dog park and the W&OD Trail.

Though Katrivanos and his brother Mike — who built the brewery’s brewhouse system — had hoped to open before the end of 2015, inspection processes delayed the opening.

This Saturday’s grand opening will feature nine beers on tap, accompanied by food trucks to be on location all afternoon. There will also be t-shirts and hoodies for sale and growlers available for purchase.

After it opens, New District Brewing Co. will boast the title of the first production brewery to open in Arlington in nearly 100 years.

New District will have full brewing operations on site and will distribute its beer to restaurants and bars. The brewery also has its own bar, with up to a dozen beers on tap at once, a tasting room with tables and a small retail space.

According to Katrivanos, more details about Saturday’s opening will be announced later this week via the company’s Facebook page.