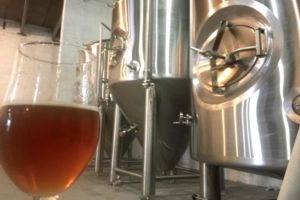 Arlington’s Metropole Brewing Company has two big events on the horizon: the opening of its first brewery and a name change for the company.

There was speculation in March that Metropole, a brewing company started by Arlington local Mike Katrivanos, might be opening its first facility at 2709 S. Oakland Street, near the Shirlington dog park and the W&OD Trail. Those suspicions were confirmed via a post on the business’s Facebook page Monday night.

“Arlington’s first package brewery since 1916 is coming to your community!” said the post. “Time and time again, Arlington County is featured as one of the best places to live in the United States. Help make Arlington an even better place to live by supporting your local brewery.”

Steve Katrivanos — Mike’s brother and former bandmate in local alt rock group Sematic — said he anticipates the brewery, which will include a tasting room, will open this fall. In addition to on-premises sales, the brewery will sell its beer to local retailers.

“This started as my brother’s dream seven years ago, and he worked with Arlington for two years to make it a reality,” said Katrivanos. “We’re almost at at the finish line now.”

Katrivanos described the company as a craft brewery that strives to use locally-sourced and quality imported ingredients. In the past, Metropole has used Virginia honeysuckle to make their beer, and Katrivanos said the company recently acquired some local honey which they plan to use in a beer sometime soon.

“We pride ourselves on unique but drinkable craft beer,” said Katrivanos.

So far, Katrivanos says the community has been very supportive, with residents coming out to look at the space or help with renovations “pretty much every weekend.”

“We want to be part of the Arlington community,” said Katrivanos.

The brewery opening isn’t the only change for Metropole: the company is in the process of changing their name to New District Brewing Co., a transition Katrivanos expects to be completed sometime within the next week.