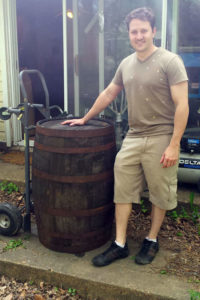 A new production brewery could be on its way to Arlington, on Four Mile Run Drive near Shirlington.

Metropole Brewing Company has applied for a permit to start a microbrewery at 2709 S. Oakland Street, in the Nauck neighborhood. The application is for a brewery producing 500 or fewer barrels per year — so far there’s no indication from either the application or the nascent brewery’s Facebook page if it plans to serve beverages on-site.

Metropole’s founder, Michael Katrivanos, did not return a message seeking comment this afternoon. He has applied for building permits with the county, but has yet to receive final approval.

If the ABC license and building permits are approved, Metropole could be Arlington’s first indigenous distribution brewery since 1916, when Arlington Brewing Company stopped making beer.

The only two places where beer is brewed commercially in Arlington are Rock Bottom Brewery in the Ballston Common Mall and Capitol City Brewing Company in Shirlington. Neither of those businesses brew beer to be sold off the premises.

This spring, Sehkraft Beer Garden and Haus plans to open in Clarendon and brew its own beer. Owner Devin Hicks told ARLnow.com last summer that Arlington’s Zoning Ordinance prohibits a brewpub from selling its beers to other businesses, but he was exploring options to work around the regulation.

Since 2012, at least two aspiring breweries had sniffed around Arlington to start operations, but both companies could not find space and close a deal.