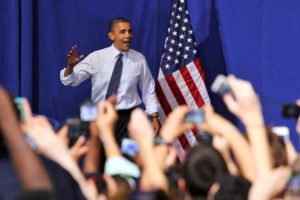 America has a new president, President Donald J. Trump, and like the rest of the nation, Arlington will have a weekend to let the reality of the new administration set in.

In the meantime, the outgoing president, Barack Obama, is leaving town for a well-earned California vacation — but only temporarily, as the Obamas be back and taking up residence in northwest D.C.

During his presidency, Obama visited Arlington a number of times. Will President Trump also make his way to Arlington County, which overwhelmingly voted against him in November? Time will tell.

In the meantime, feel free to discuss the inauguration, the new administration, or any topic of local interest in comments.