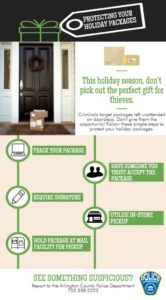 Reported package thefts dropped by 17 percent this past holiday season compared to a year ago, according to Arlington County Police.

There were only 19 package thefts reported to police in October, November and December of 2016, according to ACPD. During that same period in 2015, 23 package thefts were reported.

The number of package thefts in December specifically was higher: 12 reports in 2016 versus 8 reports for 2015. However, police say there was no series of package thefts, like there was in 2014 when one suspect was accused of at least 40 thefts.

Arlington police have been encouraging residents to have their packages shipped to secure locations or to take other steps to prevent criminals from stealing their holiday gift shipments.

“Package thefts are crimes of opportunity as criminals target packages left unattended,” said ACPD spokeswoman Ashley Savage. “The Arlington County Police Department recommends removing the opportunity for crime by: tracking your package so that you know when to expect it at your doorstep, requiring signature for your packages, having someone you trust accept the package, utilizing in store pickup or lockers and/or holding packages at mail facilities for pickup.”

To help spread awareness, the department created the graphic above, used its social media channels to distribute information and had its district teams reach out to residents at meetings.