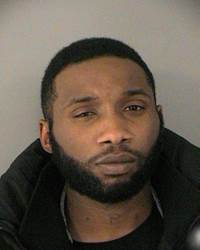 (Updated at 1:25 p.m.) Arlington County Police have arrested a man suspected of stealing dozens of packages from local homes.

There have been numerous reports of package thefts around Ballston this month. Yesterday afternoon, undercover cops patrolling the Ballston area, hoping to nab the suspect, observed a man acting suspiciously.

The man was seen “opening packages he took from doorsteps and removing the contents.” Keith Moore, 22, of District Heights, Md. and Washington D.C., was arrested and is now facing numerous criminal charges.

“It is believed that the suspect is responsible for at least 40 thefts of packages over the last several months,” police said in a press release.

The police arrested Moore just in time for the holidays, it seems. ACPD spokesman Lt. Kip Malcolm told ARLnow.com that some of the items Moore has stoled have “been recovered with their owners identified.” Many more unclaimed items were found, so the ACPD is encouraging those who have been victims of package theft to contact the department at its non-emergency number, 703-558-2222.

The full release, after the jump.

The Arlington County Police Department’s Burglary/Larceny Unit has charged a suspect with multiple theft offenses, following his arrest in the Ballston-area. The suspect is responsible for the theft of numerous delivered packages stolen from the front doorsteps of residences.

On Monday, December 22, 2014 at approximately 2:45 p.m., undercover, plain-clothes officers assigned to the Arlington County Police Department’s Tactical Unit were conducting directed-patrols, in response to multiple package thefts in the 1100-block of N. Vermont Street, when they observed a suspect acting suspiciously. The Tactical Unit then observed the suspect opening packages he took from doorsteps and removing the contents.

Arrested was Keith Moore, 22, of District Heights, MD and Washington, DC. He was apprehended without incident and transported to the police station where he was interviewed by detectives.

The investigation by the Burglary/Larceny Unit is ongoing; however it is believed that the suspect is responsible for at least 40 thefts of packages over the last several months. The suspect was charged with two counts of grand larceny, four counts of petit larceny, credit card theft, credit card fraud, and identity theft. Additional charges are pending. Moore was denied bond and is currently being held in the Arlington County Detention Facility.

The Arlington County Police Department is encouraging residents, who believe that they have had packages stolen, to file a report either by calling the Emergency Communications Center non-emergency line at 703.558.2222 or file a report online at http://police.arlingtonva.us.