(Updated at 9 a.m. Tuesday) A local tech company wants to make it easier for people to connect with their elected representatives.

That company, Phone2Action, turns people into “citizen advocates” by helping them engage with lawmakers over the phone, in emails and on social media, according to co-founders Jeb Ory and Ximena Hartsock. 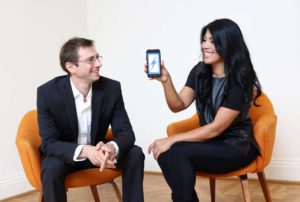 “We created Phone2Action to solve a very large but very simple problem,” Ory said. “Connecting people to policymakers so they can be part of the civic process.”

Say you run an organization or business that wants to rally supporters behind a specific cause. Using
Phone2Action’s subscription “digital grassroots platform,” you can urge people to get in touch with their state or local officials without having to step away from their computer or put down their smartphone.

“Our clients use the tools to engage their supporters and let lawmakers know about how they feel about certain things,” Hartsock added.

The company started in 2012 with just 15 employees, but quickly outgrew its location in the District. Now at 40 staffers, Phone2Action operates out of an office building in Rosslyn.

“We have about 20 open positions now,” said Hartsock. “We will be 60 [employees] pretty soon. We’re already outgrowing our space.”

When the company finally does outgrow its space, it will move to a larger office, likely elsewhere in Arlington, Hartsock added.

In the future, Ory said the Phone2Action will continue to invest in working with new platforms. For instance, the company is looking to integrate its platform with Alexa, Amazon’s voice-activated service.

Phone2Action also has plans to expand its service to other places across the globe, like Chile and countries in Western Europe.

“There’s a huge opportunity to help people across the world weigh in and talk about matters that are important to them,” Ory added.

END_OF_DOCUMENT_TOKEN_TO_BE_REPLACED

More Stories
The Chew: Why Some Dogs Hate the CrateBeyer: Federal Hiring Freeze Is Not Putting ‘America First’