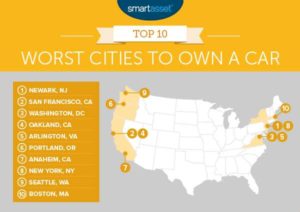 Arlington County is the No. 5 worst “city” in which to own a car, according to a new study.

The website SmartAsset ranked localities by factors like hours spent in traffic per year, rate of motor vehicle theft, number of parking garages per driver and “the non-driving options a resident has for getting around.”

At the top of the list — the alleged worst city to own a car — was Newark, New Jersey, followed by San Francisco and D.C.

Here’s the explanation for why Arlington was No. 5:

As previously mentioned, the Washington, D.C. metro area has the worst traffic in the country. Unfortunately for the residents of Arlington, they are a part of that metro area. They face the same brutal 82 hours per year spent in traffic, on average. It costs Arlington residents $1,834 per year, on average, waiting in that traffic. For residents of Arlington, a car is more of a necessity than it is for people living in D.C., which is why it ranks lower in our study.