Wintertime ushers in the season of strong ales, whether they’re the hearty brown ales that I wrote about before the end of last year or imperial stouts. The imperial stouts are often barrel-aged or flavored in ways that might boggle your mind.

Barrel aging is no longer a matter of finding a set of barrels and aging the beer. Now, it’s desirable to source specific use barrels — sometimes even from particular distilleries like Pappy Van Winkle — like bourbon or port or bourbon and maple syrup.

And flavoring isn’t about adding a little bit of this and a little bit of that, nor is it just about adding coffee or chocolate anymore. Like bakers who attempt to wow by combining more flavors than are needed, brewers are increasingly adding a shopping list of items to a single beer. The goal is to recreate a particular flavor or sensory memory, as long as it’s not too overwhelming or muddled, that is.

The three beers I’m featuring today are in limited release and prove to be interesting examples of the two main types of imperial stouts that are popular this time of year. First is the bourbon maple syrup barrel-aged Michigan Maple Jesus. Then are two doozies of flavored imperial stouts: the s’moresy Dino S’mores and the cinnamony Imperial Mexican Biscotti Cake Break. I was not surprised to find that the two flavored stouts were collaborations — they sound like they have a too-many-cooks-in-the-kitchen list of ingredients. But let us take a sip… 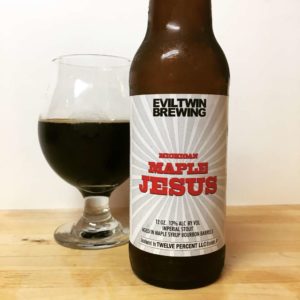 Evil Twin Brewing Company, Michigan Maple Jesus (12% ABV)
Evil Twin’s already formidable imperial stout, Even More Jesus, forms the base of this new, sweeter beer. Reportedly brewed at Dark Horse Brewing Company in Michigan then aged for 8 months in bourbon barrels that had also held maple syrup, Michigan Maple Jesus is it’s own special beer. Inhaling the aromas from this opaque black brew conjures up a comforting blend of wood and vanilla and dried stone fruits and loam. The sip is as simple as the aroma is complex. The sweet fruit of prune dominates giving way to vanilla in the finish. Aging has taken the sting out of the 12% ABV — this is a supremely smooth beer that goes down easy. You will likely only find this being sold by the 12 oz. bottle, but its worth stocking up. Drink some now and age some even longer. 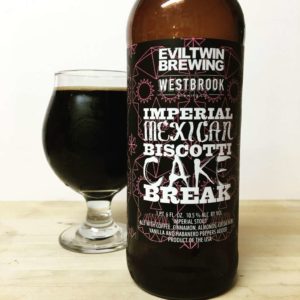 Evil Twin Brewing Company/Westbrook Brewing Company, Imperial Mexican Biscotti Cake Break (10.5% ABV)
Here we have a collaboration brew that mashes up Evil Twin’s Imperial Biscotti Break and Westbrook’s Mexican Cake stouts. If you think the name is a mouthful, check out the ingredients list: coffee, cinnamon, almonds, cocoa nibs, vanilla and habanero peppers. That pretty well checks the box for each of the words in the name. South Carolina’s Westbrook Brewing Company brewed this collaboration beer. The result is a decent, strong stout that doesn’t quite get all the way to any of the promised flavors. The habanero is completely absent, an observation that I’ve heard others make. The actual experience starts with strong aromas of black coffee and cinnamon with an earthy almond skin. The flavor runs with the almond, which combines with a booziness to remind you of marzipan. Before it gets very sweet, though, the sip finishes in bitter black licorice. The result is that it never quite gets to the sweetness I expected with both cake and biscotti in the name. This is a special, hard to find stout that probably doesn’t live up the reputation of either Imperial Biscotti Break or Mexican Cake. 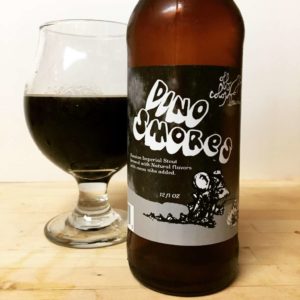 Off Color Brewing, Amager Bryghus and West Lakeview Liquors, Dino S’mores Marshmallow Imperial Stout (10.5% ABV)
Chicago’s Off Color Brewing teamed up with a local liquor store, West Lakeview Liquors, and Danish brewery Amager Bryghus to create this complicated stout. The shopping list on this beer includes nine different grains and marshmallow fluff, vanilla beans, molasses, graham flour and cocoa nibs. It’s a doozy. In a good way. After pouring an opaque black, the aroma transports you fireside just like the mouse toasting marshmallows on the label. Molasses and dried stone fruit combine to conjure up memories of caramelizing marshmallows. Dino’s flavors are more traditional for an imperial stout: sweet and slightly black malt bitter with a subtle fruitiness that was hinted at in the dried stone fruit aroma. Much like the Michigan Maple Jesus, this strong stout is smooth and alcohol burn free. Dino S’mores is a charming dessert stout that will brighten any evening during this season of short days.