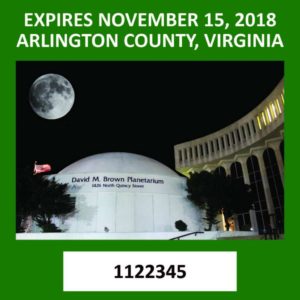 The David M. Brown Planetarium will soon appear on the windshields of more than 160,000 vehicles throughout Arlington.

The winning submission from Wakefield High School sophomore Amy Kohan was announced during a County Board meeting Tuesday afternoon.

“I chose this because it was one of the things I looked forward to [visiting] in elementary school every year,” Kohan said during the award ceremony. “It’s one of my favorite things about Arlington.”

For her hard work, Kohan will receive a cash prize of $750 from the Arlington Community Federal Credit Union. Finalists Schuyler Workmaster, Sydney Machion and Marjorie Henriquez will each receive $500 for their submissions.