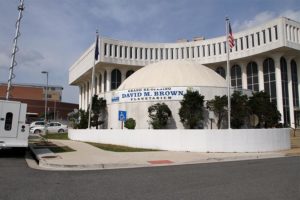 (Updated at 4:50 p.m.) Two and a half years after we first reported that Arlington Public Schools was planning to close the aging David M. Brown Planetarium (1426 N. Quincy Street), the planetarium officially reopened today (Friday) with a flourish.

Elected officials, school employees, media members and planetarium supporters were on hand for a ribbon cutting ceremony and reception this morning. It was the culmination of a lot of hard work by a dedicated group of planetarium boosters — the Friends of Arlington’s Planetarium — who succeeded not only in preventing the planetarium’s closure, but in raising more than $400,000 to fully renovate and modernize the facility. 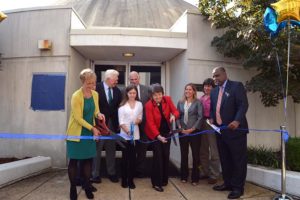 Raphael Perrino, a former Arlington Public Schools student who helped lead the charge to save the planetarium, said today’s opening was “surreal” after so many hours spent to make it possible.

“This is a triumphant day for Arlington, and I’m proud to be part of this group and proud of the planetarium,” he told ARLnow.com. Perrino said he hopes the planetarium will continue to inspire budding astronomers and scientists for years to home.

“This is such a wonderful day… it’s similar to my first time coming to the planetarium when I was six years old,” he said. “I remember coming through that hallway and seeing all those galaxies, and supernovae and nebulae and planets. Coming into that room that was full of stars — that to me was one of the most awesome things I’ve ever seen, to see a night sky. Growing up in an suburban-slash-urban environment you’re not used to seeing a sky like that. To have seen that for the first time was very special. So this is almost similar, in the level of excitement. It’s just an exhilarating day.”

About half of the more than $400,000 raised to save the planetarium was donated by small donors — often in $5, $10 or $20 increments — the other half came from large donors, Perrino said. In addition the numerous volunteers, donors and petition signers, Perrino credited Arlington’s unique brand of civic participation for today’s joyous outcome.

“It’s a victory for Arlington children, it’s a victory for science outreach and education, and it’s really quintessential Arlington Way,” he said. “The idea that you see something you don’t like, you get together and do something about it. It’s civic engagement that you see here, and it’s a beautiful part of this community. I feel very privileged to have been a part of this campaign.”

Friends of Arlington’s Planetarium President Dr. Alice Monet, who was among the speakers at the ceremony, said one of the more powerful emotions she experienced today was relief.

“Speaking for myself, I feel happy and relieved that the job has been finished and everything turned out so well,” she said. “It was such a complex effort, involving so many people, all sorts of challenges, roadblocks and opportunities, near disasters and astonishing breakthroughs, personality clashes and camaraderie — and, overall, it was a very humbling and inspiring experience. The new planetarium is sleek, polished, and beautifully functional. I feel sure it will be a great place for teaching and inspiring students, teachers, and the whole community for years to come.”

About 25,000 students are expected to visit the planetarium each year, according to Perrino. That number may increase, he said, as other school systems consider arranging for their students to utilize the facility.

The planetarium is named after the late astronaut and Yorktown High School grad David M. Brown, who perished in the 2003 Columbia disaster.

In addition to hosting today’s ceremony, the Friends of the Planetarium will be hosting a series of grand opening events this weekend.