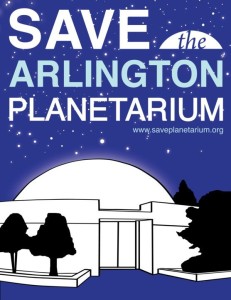 It’s been a busy first 25 days for the Friends of Arlington’s David M. Brown Planetarium. The group, established to help save the planetarium from a slated closure by the school system, has applied for status as a 501(c)(3) nonprofit, launched a website, joined Twitter, and has raised $2,500 from 40 donors.

The daunting goal is more than the group thinks it needs to raise to upgrade the 40-year-old planetarium. School officials have included a $162,000 dome replacement in the cost — an expense the group disagrees with. Instead of squabbling over the dome, however, organizer Raphael Perrino says the group has decided to focus on raising money.

It’s not clear what will happen if the group doesn’t meet its fundraising goals. School board chairman Sally Baird told the Sun Gazette last month that “no board action has been taken in regard to the specific fund-raising targets, nor whether those targets are absolute.”

Both parties are expected to formulate a Memorandum of Understanding, which would address the the dome issue and other specifics, at an unspecified later date.

The Friends of the Planetarium will be meeting Wednesday night to discuss the group’s progress and to formulate a fundraising strategy. The meeting will be held from 6:30 to 8:30 p.m. in room 108 of the Langston-Brown Community Center (2121 N. Culpepper Street). Pizza will be served.

While the Friends wait for their 501(c)(3) status to be approved, supporters are being asked to donate to the cause through the Arlington Community Foundation, which has set up a “planetarium fund.” All donations to the fund are tax deductible.