(Updated at 12:48 p.m.) Up-and-coming tech companies that cater to the U.S. government now have a refuge in Rosslyn.

Government contracting startup accelerator Eastern Foundry threw a party last week to celebrate the opening of its new office on the 10th floor of 1100 Wilson Blvd. It first announced the expansion last June.

Though the 19,237-square-foot space is slightly smaller than Eastern Foundry’s first office in Crystal City, it still offers plenty of room for government-focused startups. 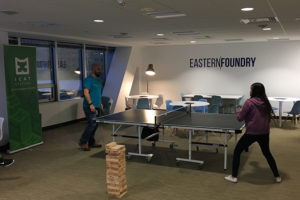 In Crystal City, many of Eastern Foundry’s tenants work with sensitive government defense contracts and therefore need a little more privacy, he explained. In contrast, the Rosslyn office is suited for collaboration and open discussion. Job opportunities and announcements are beamed onto two televisions in the office’s kitchen each day, for instance. 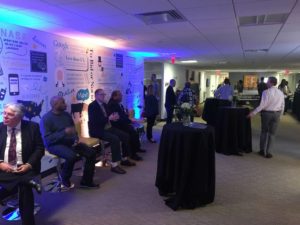 Representatives from dozens of small businesses mingled over food and drinks during the company’s grand opening party last Thursday. Though the new office has been open for less than a week, it’s already about 30 percent full, Chang said. Eastern Foundry expects that number will grow quickly.

“Virginia is all about business,” Chang said. “It’s very small business friendly and it works for our member companies.”

But it’s not just Eastern Foundry’s tenants that stand to benefit from the new office. Rosslyn itself could also see an economic boost from all the new tech companies setting up shop there.

“Eastern Foundry is a unique and important addition to our business community because they are cultivating the next generation of government-focused technology companies,” said Mary-Claire Burick, president of the Rosslyn BID. “These companies, and the investment capital and young talent they attract, stand to have a major impact in Rosslyn for years to come.”

Check out some more photos of Eastern Foundry’s new offices below.