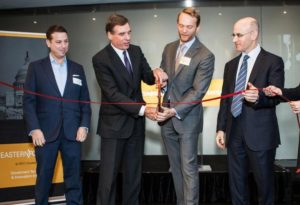 A new opportunity for burgeoning technology companies is coming to Arlington this fall.

Last week, Crystal City’s Eastern Foundry — a veteran-owned working space and accelerator for startup firms interested in working with the federal government — confirmed it will open a second location in Rosslyn, just 18 months after its inception.

The new space — a 19,237-square-foot office located at 1100 Wilson Blvd — is slated to open later this year, but some tenants want to move in sooner.

“We will be slowly filling in a few companies who are quite eager to get space even while the renovations are going on,” said Dan Bowman, a communications associate at Eastern Foundry. “We expect to be fully functioning by early fall once renovations are complete.”

Eastern Foundry originally planned to expand to the District, but inaction by D.C. officials and enthusiasm from Arlington economic development staff helped to convince the company to launch a second location in Arlington County instead, DC Inno reported last week.

The Rosslyn location is about 55% pre-committed and Eastern Foundry has formed “a bit of a waiting list,” Bowman said. Companies that have pre-committed to the new space include startups focused on mobile health care, mobile banking, laser diagnostics, cybersecurity and big data. 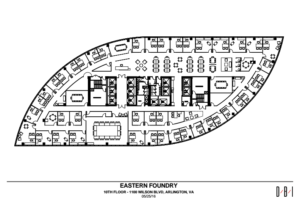 Eastern Foundry said the new space will allow the accelerator to double its membership.

“The 81 members in our Crystal City campus have validated our strategy, and this second location will allow us to expand into the hundreds, increasing the range of technologies, services and agency insights that our members can provide to the government and to each other,” Geoff Orazem, co-founder of Eastern Foundry, said in a release.

Bowman added, “Doubling in size not only increases the chance that our members can find powerful partners within our community, but it also serves as a larger resource for the government to tap into in order to find new and exciting solutions to their technology needs, gauge the contracting market or simply learn from agile startups.”

Rosslyn was chosen for the new location because of the area “is strategically positioned at the intersection of the civilian federal market in Foggy Bottom and the defense federal market near the Pentagon,” according to the release. “It is a direct shot to the original Crystal City campus, Tyson’s Corner and Reagan National Airport, and with the office being [near] the Metro, members can easily reach the entire national capital region all while enjoying Virginia’s business-friendly environment.”

Andrew Chang, co-founder of Eastern Foundry, said, “the expansion has been in the works for quite a while and is a crucial part to our overall growth strategy,” adding, “[W]e are very excited to continue to grow our brand and footprint in the DMV area.”