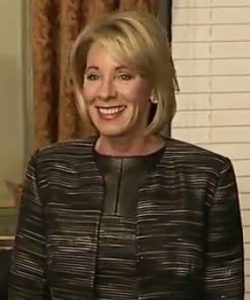 Betsy DeVos, a billionaire philanthropist from Michigan, was the Trump administration cabinet pick who garnered the most stout resistance from Democrats. Opponents worry that she will support private K-12 schools and voucher programs at the expense of public education. That even pulled two Republicans over to vote “no” alongside all 48 senate Democrats.

What DeVos means for Arlington Public Schools is unclear.

In confirmation hearings she voiced support for giving states more decision-making power over education. That contrasts with concerns from teachers unions and public education advocates, who worry DeVos could use her role in the federal government to push for school-choice policies, like those implemented with questionable results in Michigan.

Federal funding only accounts for about 2 percent of the overall APS budget, meaning that in a worst case scenario — APS refusing federal funding so as to not be subject to new federal mandates — the school system would have to trim expenses or increase revenues by about $13 million.

“We will, of course, continue to work with the U.S. Department of Education in a variety of key areas,” Van Doren said in a statement. “Arlington receives only about two percent from the federal government. It is too early to predict what impact her leadership will have. Like all public schools in the country, we have to hope for the best.”