Let’s go on a field trip. Across the Wilson Bridge and up I-95 are some breweries that are making delicious beers. Some of them are beginning to distribute in Virginia, making it easier to experience their handiwork.

In 1993, some brewing equipment imported from England was set up in the basement of The Wharf Rat, later becoming the Pratt Street Ale House. What started out as a specialty craft brewery focused on making traditional English beers morphed into a brewery making well-crafted classic styles with an eye to the trendy. In 2015, they grew into their current 12,000 square foot brewery where they package beer in kegs and cans. It’s a minor wonder that after more than 20 years in business, they only just began canning last March. 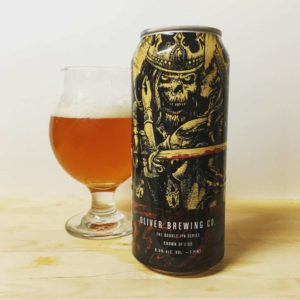 Oliver is famous for the music that they play during brewing and packaging — from classic metal to contemporary indie metal. Music drives the brewing and infuses their line up whether it’s a core beer like Ironman or their special collaborative double IPA (DIPA) series with beers like Pagan Science or Crown of Lies. The latter two named after songs by the indie metal bands The Well and Mothership, respectively, who collaborated on the brews.

This is a big beer — both drinkable and strong. It feels special. Inhale and the dankness of pine resin fills your nose followed by a hint of caramel. Full of flavor, I got strong pine and black tea with a delightful sweetness. there might be a (an awesome) skeleton king with a bloody sword on the can, but this DIPA is smooth and refined.

Union began operations in 2012 with the introduction of it’s flagship beer, Duckpin Pale Ale. They may have started with a straight pale ale and not a trendy style, but their beers are constantly garnering accolades. From their Old Pro gose, which I’ve covered here, to Balt, their German Alt bier throwback, they’ve won national awards. 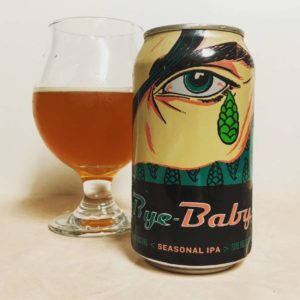 Named for the Baltimore native, John Waters’ film Cry-Baby, this rye IPA hits all the right notes for a delicious beer. Rye IPAs are among my favorite takes on the style — rye, long thought to only add to the pour of a beer (it can improve the density of a head), brings a peppery spice to the party that cannot be easily replicated. Here the aroma is a blend of pine, soda cracker and black pepper. That segues nicely into the sip, which is clean with a more floral hop profile and a light bitterness. The rye’s signature pepper shows up in the finish.

I’ve heard from more than one beer lover that they make sure to have some of this on stock while it’s in season. Rye Baby is a solid go-to beer that delivers on the promise of a rye beer. I wouldn’t be surprised to learn that Union decides to make this a year-round beer.

Located just north of the District, is the two-year old Denizens Brewing Co. Started by Emily Bruno, Julie Verratti and Jeff Ramirez, Denizens was meant to have a neighborhood vibe that welcomed all beer lovers. Denizens began to package their beer within a year of opening. Sold in tall boy, pint sized cans, Denizens’ offerings range from a their staple rye IPA, Southside Rye, to their Belgian-style tripel, Third Party. 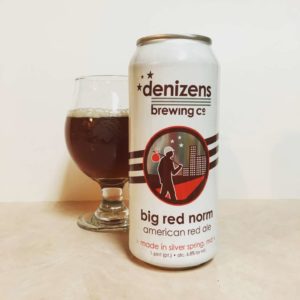 Named after Norman Lane, who is considered the unofficial mayor of Silver Spring, Big Red Norm is a perfect example of Denizen’s attention to its home. A homeless man who became a beloved fixture of downtown Silver Spring for nearly 25 years, Norman Lane has been immortalized in public art and in this tasty beer.

This red ale has more to offer than your average red. Bursting with black currant, wheat bread and caramel, the aroma is nearly reminiscent of an Oktoberfest. The dark berry explodes in the flavor, challenging my expectations of a red ale. More fruity than malty, this beer flips the script on red ales. I’ve been a fan of their rye IPA since I first had it when it was only on draft — Big Red Norm is now on my list of favorites from Denizens.

Operating as a “farm brewery,” Manor Hill began production in 2014 after more than a year of political maneuvering. Being a farm brewery means that they have to use at least one ingredient from their own farm, whether it’s the hops or the grain. And they can produce no more than 15,000 barrels of beer a year. Manor HilI grows cascade, nugget, chinook and centennial hops on two acres of their farm, which already supported beef cattle and corn for feed. Though their beers are available in limited quantities in Maryland, they’re worth the short drive across the river. 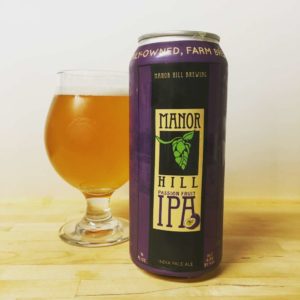 This fruity IPA enters a market full of both fruit-infused and hop-derived fruity IPAs. Manor Hill started with their flagship IPA, a beer flavored predominantly with Mosaic hops, and added passion fruit purée. The result is a tropical smelling beer with clear passion fruit aroma mixed with honey and herbs. The flavor ends up being more generally fruity than specifically tropical,  but is a pleasure nonetheless. This beer is a refined entry into the fruit IPA category with its fruity start and light, herbal finish. Though this beer isn’t yet available in Virginia, it’s worth a short drive to find it in Maryland.