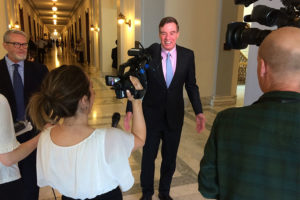 Sen. Mark Warner (D-Va.) has released a statement on the resignation of Gen. Michael Flynn as National Security Advisor.

Warner, who serves as the vice chair of the Senate Select Committee on Intelligence, said that he will continue to push to investigate Gen. Flynn and “any other campaign official who may have had inappropriate and improper contacts with Russian officials prior to the election.”

Reports that the White House may have been briefed weeks ago on the nature of Gen. Flynn’s calls raise deeply troubling questions. The American people deserve to know at whose direction Gen. Flynn was acting when he made these calls, and why the White House waited until these reports were public to take action.

These developments underscore how many questions still remain unanswered to the American people more than three months after Election Day, including who was aware of what, and when. This reinforces both the urgency and the significance of the Senate Intelligence Committee’s bipartisan investigation into Russian interference, which will include a thorough examination of contacts between Russia and individuals associated with political campaigns, as well as interviews with current and former government officials.

Nothing about this resignation, or resignations that could occur in the future, precludes the Senate Intelligence Committee from continuing to investigate Gen. Flynn, or any other campaign official who may have had inappropriate and improper contacts with Russian officials prior to the election.

It is clear that our task is more urgent than ever.

The resignation of Lieutenant General Flynn cements the worst fears of many Americans and our allies about the connections between this Administration and the Kremlin. His alarming communication with the Russian government underscores the need to complete a full, independent, bipartisan, and transparent investigation of contacts between the Trump campaign and the Trump Administration, and the Russian government. It also raises new questions about why the White House didn’t act on confirmed intelligence regarding Flynn’s outreach to the Russian ambassador weeks ago. Flynn is now the third Trump advisor to resign due to unseemly ties to Russia and yet again President Trump is trying to distract from these serious allegations by railing against leaks in his Administration. We need to get to the bottom of these ties to Russia in order to protect our country.