The controversy over a sign posted by teachers at Yorktown High School has taken an even bigger national stage. 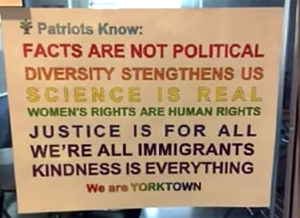 Piper says he and his parents talked to to school administrators, the Arlington School Board and local radio station WMAL about why the signs are “obviously” political, especially given the current political climate. But after being told the signs would be coming down, Piper says administrators “changed their minds” and the signs remained.

Tipsters tell ARLnow.com that those inquiring about the decision to keep the signs were sent a letter to the School Board from a Yorktown physics teacher objecting to the removal (posted below, after the jump).

Carlson called the signs “the sneakiest type of propaganda… propaganda passing itself off as obvious observations.” He asked Piper if anyone at the school thinks that science “is not real.”

“No,” Piper replied, adding that he and fellow members of the Yorktown Republican club also believe in diversity despite implications to the contrary given their opposition to the signs.

A similar sign about conservative values — like the Second Amendment right to bear arms — would not be allowed at Yorktown, Piper guessed.

“There’s a serious double standard here,” Piper said. “Conservative values would not be accepted on the walls of the school, especially in the way they’re doing them. They would see through that easily.”

This is not the only sign controversy brewing at Yorktown. A Black Lives Matter banner at the school was removed late last week, according to a tipster. High school principals, we’re told, have been meeting “to set policy for putting signs up in the future.”

Update at 5:50 p.m. — On Tuesday afternoon, Yorktown principal Dr. Ray Pasi sent a letter to students and families regarding the sign issue.

The letter from the teacher regarding the “Patriots Know” signs, after the jump.

My name is Deborah Waldron and I am a teacher at Yorktown High School. I am writing to express my dismay that the signs the YHS faculty posted […] to support and welcome all of our students were removed as they were deemed to be political in nature.

I have read through the sign numerous times; I have also studied the APS and YHS vision statements. I can find nothing in these signs that are not supported by, and in fact promoted by, the values and beliefs of Arlington Public School. I would like to know why these signs were removed.

As one of the teachers who helped design and distribute these signs, I am aware of the significant forethought that went into the exact phrases that were chosen. We wanted phrases that were factual, non-partisan, and essential to maintaining the community spirit of Yorktown while also supporting the academic mission of Yorktown. Although many of us, for instance, wanted to include the phrase Black Lives Matter, we choose not to. This phrase, although one hundred percent true and factual, belongs to a political group and was therefore inappropriate for a school setting. Similarly, no signs were posted that said “Love Trumps Hate”  or “Stronger Together” as they would clearly convey political affiliation.

The phrases we picked were meant to focus on our need to be a true community where everyone is respected, valued, and supported.  As you are aware, our Yorktown community has been challenged recently through instances of racism, anti-gay sentiments,  anti-immigrant sentiments, and anti-Semitic statements. None of these ideas belong in our school and none of them promote the safe environment needed for students to learn. Now, more than ever, the sentiments of these signs are essential for helping our students learn to live in a diverse society where differences can be discussed in a respectful and non-threatening manner.

To help explain our intentions, below are listed the phrases on our sign along with the reasoning for including these phrases.

Facts are Not Political:

As educators, one of our many jobs is to teach facts. Facts are simply that–facts. They do not have political meaning and stating facts should not be construed as political. For example, six million Jewish people were murdered in the Holocaust. Despite the well documented evidence of the Holocaust, there are groups who deny its existence or the scope of its devastation. As educators, it is our job to teach facts and help students recognize that all facts may not be comfortable to them or their belief system.

The APS Core values state, “We value all students, staff, and families in our diverse, inclusive school community.”  If this is true, I cannot imagine a reason why a statement that supports the core values of APS should be removed.

As a physics teacher, I feel quite passionately about this statement. Regardless of personal opinion or political beliefs, the global temperature of the Earth is rising. As a scientist, I teach this in my classroom as it has been supported through numerous peer reviewed and repeated experimentations. That is the beauty of science–we check each other’s work and do not validate or accept findings until they are supported by repeated observations. In 1989, for instance, two scientists at the University of Utah announced that they had discovered “cold fusion”-the ability to produce nuclear fusion and therefore amazing amount of energy at room temperature. However, as scientists began to attempt to replicate the findings, significant flaws were discovered in the methodology. Despite public excitement and interest, the ideas of cold fusion were quickly rejected. Science is a process, it is real, and as educators we need students to recognize the value and validity of science.

The first known use of the phrase women’s rights are human rights is from abolitionists in the 1830s. The phrase was again used in the 1980s by the Head of the New York City Human Rights Commissions and by Cecilia Medina, a Chilean legal expert. The phrase has also been used by The Canadian head of the International Center for Human Rights and Democratic Development and is also included in the Malaysian Charter on Human Rights.[i]

In 1995, Hilary [sic] Clinton, speaking for the United States as the First Lady, spoke at the United Nations Fourth World Conference on Women.  During the course of her speech, Mrs. Clinton said “If there is one message that echoes forth from this conference, let it be that human rights are women’s rights and women’s rights are human rights, once and for all”. She continued,

As long as discrimination and inequities remain so commonplace everywhere in the world, as long as girls and women are valued less, fed less, fed last, overworked, underpaid, not schooled, subjected to violence in and outside their homes–the potential of the human family to create a peaceful, prosperous world will not be realized.[ii]

The YHS mission statement delineates that students will deliberately promote and support the worth and dignity of themselves and other and demonstrate moral and ethical habits in their lives. The phrase ‘Women’s Rights are Human’s Rights” has been used to target slavery and to promote the self-worth of young girls and women throughout the world. I certainly believe that these are values for which APS stands.

Justice is for All:

The state of Virginia requires us to say the pledge of allegiance every day. It ends “And justice for all”. This statement simply reinforces and restates something that students hear every day. And, quite honestly, its importance to our society makes it worth repeating.

This may be the most controversial statement on the sign as it is actually not true. Native Americans are not immigrants. Many African American families were brought here by force so the term immigrant is not appropriate either. The goal, though, was to high-light that none of us were here originally–our families all came from somewhere else. The only difference between current immigrants and past immigrants is the time period. This is an extremely comforting and supporting statement for students who are current immigrants and is an important way to help welcome these students into our community

However, I recognize the concern for African Americans and Native Americas and, if this is problem phrase, it could be altered to “All Students Are Valued” , “We Respect Everyone”, or “We are One Nation”.  Both are true statement although neither is as powerful for our immigrant students at YHS.

There are conservative students, liberal students, GLBTQ students, black students, immigrant students, students of numerous faiths, and students with no faith.  At times, we will all disagree on various ideas and topics but that disagreement does not mean that we cannot be kind. Teaching students this skill may be the most important thing I do as an educator.

The YHS mission statement concludes that students will be able to “demonstrate moral and ethical habits in their lives.” This sign is simply a public expression of this important idea. We are all different and yet we are all Yorktown. Our differences strengthen us and help us grow. We are one and we will support each other. Because, We are Yorktown.

This sign emerges within the context of a political climate, but it is not political. This sign is not partisan and only states facts, not opinions. It does not make comments against controversial issues of taxes, healthcare, or even educational policy. It is an attempt to cut through politics to show support for what we as a school value, and work to instill in our students. When a student walks down the aisle with their cap and gown, everyone should understand that their education at Yorktown involved educating the whole child.

As we continue our mission of education and support, we welcome the school system’s help in revising the sign to remove or modify any phrase that is deemed inappropriate so the message may be reposted for the edification and education of all.

These signs are one of many essential steps needed to make YHS the strong, inclusive community it needs to be.