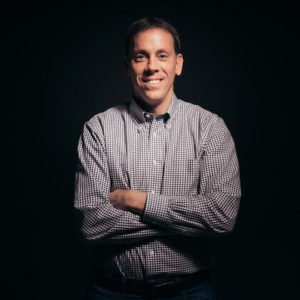 Jim VandeHei was a political writer for the Wall Street Journal and the Washington Post before co-founding Politico in 2006.

A decade later, Politico is a major force in the news industry and VandeHei has moved on to found another media startup: Axios.

Launched in January and based (for now) at MakeOffices in Clarendon, Axios has made some big hires, broken some big stories and is growing rapidly, thanks in part to investment from major media companies.

In this week’s 26 Square Miles podcast, we talked with Jim about his vision for Axios, the current state of the media industry and his take on what’s happening inside the Trump White House.

Some of the initial headlines about Axios, before it launched, revolved around a number VandeHei threw out as a potential price for a subscription: $10,000 per year.

“It could be that number, it could be higher,” VandeHei told us. Large companies and lobbying groups, he said, have that kind of money to pay for information that’s valuable to their business.

For those of us who don’t have thousands to spend on enterprise-focused news and analysis (the subscription service will be launched at a later date) the site and its email newsletters, from marquee names like co-founder Mike Allen and former Fortune columnist Dan Primack, are free. The first thing you’ll notice: the emphasis on brevity. It’s a key ethos at Axios and VandeHei says the goal is to give busy people only the facts they need — “long enough to give you what you need but not so long that it bores you and turns you off.”

In addition to the subscription business, Axios is making money by holding events and by selling advertising to blue chip advertisers like Bank of America, Walmart and BP. VandeHei said that at a time when Facebook and Google are vacuuming up many of the dollars streaming into digital advertising, a diversified revenue stream is important.

On the topic of Trump, VandeHei was candid about what he described as “an unprecedented presidency.” We asked him what might happen to Arlington and the D.C. area under Trump, given the president’s rhetoric about “draining the swamp” and reducing the size of government.

“I don’t know, and I don’t know because the president doesn’t know,” VandeHei said. “I think people assume he came with a very specific plan and a very team that would carry it out, and none of those things is true. They’re making it up on the go.”

VandeHei, who together with Allen interviewed Trump last month, said the president does not have “a strong ideology” outside of immigration and trade. Other issues, he said, are “fully negotiable.”

Lest an optimist think that Trump will get his administration to stabilize and function more like those before it, after a rocky first few weeks in office, it probably isn’t going to happen, according to VandeHei.

“People need to pinch themselves,” he said. “This is not normal.”

“Having had pretty good visibility into this White House, it’s a mess and I’d say it’s arguably worse than you think it is,” VandeHei said. “It’s just competing factions, no trust… it’s a tough way to run a White House. We’re three weeks in, half the people at the senior level think they’re on thin ice and going to lose their job, the other half are angling for a better job that they can have, and none of them are focused on carrying out an agenda that’s going to be awesome for America.”

That all said, VandeHei defended Axios’ Trump Tower interview and Mar-a-Lago visit from others in the journalism world who criticized it for appearing too cozy with the incoming administration.

“I find a lot of these arguments silly,” VandeHei said when asked about that and about the turmoil over the news organizations pulling out of the White House Correspondents Dinner now that Trump is president.

VandeHei had the following advice for journalists in the Trump era: focus on facts, hold people accountable, avoid media “self-flogging” and “maybe stay off Twitter.”