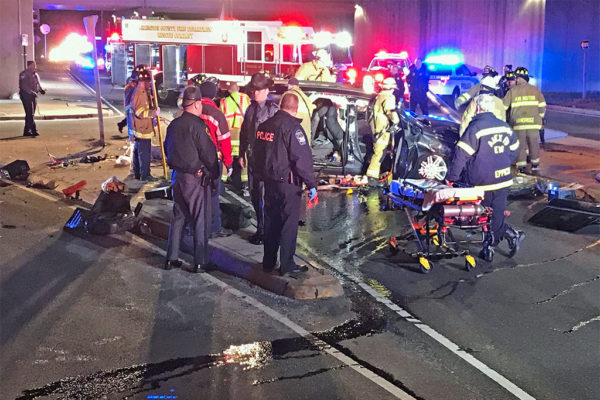 (Updated at 11:45 a.m.) A vehicle ran off the side of an I-395 overpass last night and landed on S. Rotary Road at S. Eads Street, a main entrance to the Pentagon reservation. 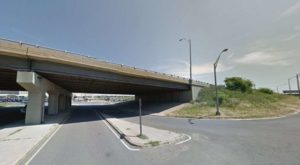 The incident was reported around 12:40 a.m. Arlington County firefighters responded and worked to extricate the driver, who was trapped inside the vehicle.

Once freed, the driver was transported to the trauma center at George Washington University Hospital for “further evaluation,” according to ACFD.

The vehicle — described as a hatchback or hybrid SUV — was heavily damaged in the 25-50 foot fall from the highway to the roadway below. It also took out a “large light pole” on the way down, according to a fire department Facebook post.

No other vehicles were reported to be involved.

#FollowUp: Photos after early morning extrication involving a vehicle that drove off of I-395 & landed on S. Eads Street below. pic.twitter.com/ZkmaarBa4k

#Update: Patient has been extricated and is being transported by medic unit to @GWHospital further evaluation.