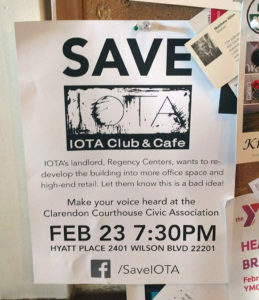 Fans of Clarendon’s IOTA Club and Cafe have launched a campaign to save the business from redevelopment.

The redevelopment plan, first reported by ARLnow.com, would tear down IOTA’s existing building at 2832 Wilson Blvd. In response, a “Save IOTA” Facebook page has been created and flyers are being distributed around Clarendon, encouraging supporters to attend a Clarendon-Courthouse Civic Association meeting on Thursday, Feb. 23.

Organizers say they want to block the redevelopment, which requires approval from the Arlington County Board.

A spokesman for Market Common Clarendon owner Regency Centers, however, says that it is working to ensure that IOTA — a staple of the local live music scene — remains open.

“Keeping IOTA has always been part of our plans,” said Eric Davidson, communication manager for the Florida-based company.

“We’ve been aware of IOTA’s importance to the community since before we bought the property,” said Davidson. “There’s no reason [to run the campaign.] If they want to show up and show their support for IOTA, that’s great, but we don’t plan on closing it.”

Regency has been “been doing what we can” to work with IOTA owner Jane Negrey Inge, according to Davidson, but he declined to specify how IOTA might remain open during the proposed demolition. A community meeting regarding the plans is being scheduled for March 29 at 2801 Clarendon Blvd from 6-9 p.m., he said.