It’s no secret that child care services are hard to come by in Arlington.

Locals who want to put their kids in preschool or daycare programs might have to wait for months before an opening appears. At Early Steps Bilingual Preschool in Lyon Village, the wait list for the upcoming 2017-18 school year is between 20 and 30 names long. And that’s fairly average, according to the preschool’s director, Michelle Clark.

“I have many parents who come to me before they have given birth who put their children on the wait list,” she said. “When parents ask me what the probability is of getting in, I tell them it’s kind of a strange science.”

What’s the problem? For one, says Arlington County Board vice chair Katie Cristol, there’s just too many kids and not enough daycare facilities. Cristol, who won her seat in 2015 after running on a policy platform that included child care, has long spoken out about the lack of affordable options in the county.

“Arlington has a child care supply problem, resulting, at least in part, from high commercial rents and growth in demand,” Cristol said.

The number of kids in Arlington vastly exceeds local availability. As WTOP reported this month, children outnumbered daycare and preschool openings by a ratio of roughly three-to-one in 2015. 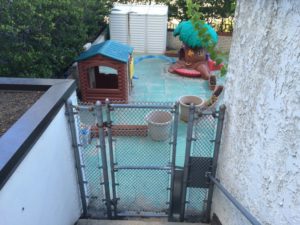 But the supply problem isn’t only frustrating parents. In Cristol’s view, not having enough child care options can hurt the county’s prospects attracting and retaining young workers who either have a family or want to start one soon.

“Limited childcare supply creates not only personal strain on individual families, but also a problem for Arlington’s long-term economic competitiveness,” she said. “Our highly-educated young workforce is a key selling point for new businesses and organizations to locate, or existing organizations to expand, here.

Another issue is the lack of space for providers. Tatjana Vichnevsky, who heads the Full Circle Montessori School, said she’d like the county to rework the regulations that surround opening a new child care center. Specifically, Vichnevsky said rules regarding parking and green space at a daycare need updating.

“If you’re in Arlington and you want to open a school, not only do you have the state standards, but there’s also another layer of regulations and bureaucracy,” she said. “Just finding the space is an absolute nightmare.”

Last year, Arlington dropped a proposed update to its child care regulations after several County Board members, Cristol included, slammed the inclusion of certain controversial provisions. Cristol was also critical of adding to the regulatory burden of small daycare providers without a clear health or safety imperative.

Moving forward, Cristol said her goal will be to look for ways to “clear obstacles to, and support, the provision of more high-quality childcare in Arlington.”

She added that the county’s upcoming 2018 budget could be an opportunity to advance that priority.

“Strategies include more technical assistance to new providers as they locate and develop their small businesses, exploration of land use and zoning strategies to increase the number of commercial spaces available for rent by childcare providers and reduced regulatory burden while still protecting quality,” Cristol said.

END_OF_DOCUMENT_TOKEN_TO_BE_REPLACED

More Stories
Ask Eli: Should You Remodel Before Selling?Smoothie Shop to Open in Virginia Square