The second season of the Real Housewives of Potomac is promising all sorts of drama, including a storyline about Oz restaurant in Clarendon.

The restaurant, which opened in 2015, is apparently not living up to the expectations of co-owner Michael Darby, according to a teaser video released by Bravo.

“The restaurant, it’s not doing well as I’ve hoped,” Darby says to his wife and fellow co-owner, Ashley Darby. “We need to sort it out.” 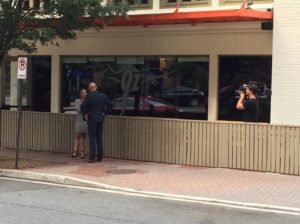 “Shut down your restaurant and this marriage will be over, I am telling you that right now,” Ashley Darby says in a later clip, shot outside the restaurant along N. Garfield Street.

(ARLnow.com happened upon the filming of the scene, which took place on June 22, 2016.)

Despite moderately positive reviews, Oz — which serves Australian cuisine — has appeared to struggle to fill its large dining area most days of the week.

END_OF_DOCUMENT_TOKEN_TO_BE_REPLACED

More Stories
New Bar to Showcase Steamed Buns and Cocktails in ClarendonRental Trends: Should I Rent or Should I Buy?