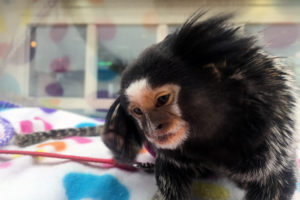 (Updated at 10:30 a.m.) The Arlington County Board is expected to mull new rules that would effectively ban locals from owning monkeys, lions, bears, alligators and other exotic animals.

The Board is scheduled to consider a request to advertise hearings this weekend on an ordinance that would change county code “to prohibit or, under specific circumstances, register the presence of wild and exotic animals and snakes over four feet in length Arlington County.”

Though the county already has rules in place regarding owning pigs, fowl and certain kinds of venomous reptiles, it lacks regulations covering “wild or exotic” creatures. The county defines those animals as the following:

“Wild or exotic animal” means any live monkey (non-human primate), raccoon, skunk, wolf and wolf hybrids, coyote, squirrel, fox, leopard, panther, tiger, lion, bear, small wild cats including hybrids (i.e., bobcats, lynx and cracal), hedgehog, sugar glider, or any other warm-blooded animal, poisonous snake or reptile or tarantula that can normally be found in the wild state, or any other member of a crocodilian, including but not limited to alligators, crocodiles, caimans and gavials.

“These and other wild and exotic animals, along with snakes over four feet in length, can be difficult to handle and can exhibit unpredictable, aggressive behavior toward humans and other species,” a board report reads.

The report continues: “Prohibiting them in Arlington would 1) protect both residents and animals from harm and reduce the likelihood of mistreatment of such animals kept out of their native habitat; 2) support public safety professionals by removing potential threats when responding to a residence; and 3) align Arlington with neighboring jurisdictions [such as the District, Fairfax and Falls Church].”

Arlington residents who violate the proposed ban could face fines. Locals who currently own such animals would either have to register them with the county’s animal control agency or turn them over to accredited zoos or nonprofits.

The Animal Welfare League of Arlington and the Humane Society of America support the changes, Arlington County said in a press release. People who want to weigh in on the proposal can email the county or attend a public hearing tentatively set for March 18.