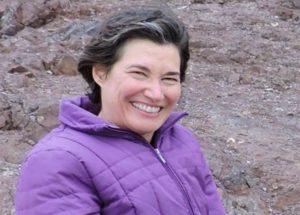 McCleskey’s body was found Friday in the Potomac River near Old Angler’s Inn in Maryland, according to U.S. Park Police. Foul play is not suspected.

A vehicle belonging to McCleskey was found in a parking lot at Great Falls National Park in Virginia on Feb. 6, when police were first informed of her disappearance.

From a Park Police press release:

On Friday, February 24 at approximately 5:50 p.m. a body was recovered from the water near Old Angler’s Inn in Potomac, Maryland.

The body has been confirmed as that of Becky McCleskey, 56, of Virginia.  McCleskey had been reported missing on February 6, 2017 in the area of Great Falls, Virginia. An extensive air, land, and water search was conducted for two days by the United States Park Police and the Montgomery County Fire and Police Departments.

Mrs. McCleskey’s vehicle was found in the parking lot at Great Falls National Park, Virginia on February 6, 2017.  There is no indication of foul play.

McCleskey has a son who is a high school student in Arlington, we’re told. She also leaves behind a husband, according to an email sent to Unitarian Universalist Church of Arlington parishioners.

Her first husband, Arlington native Brian McCleskey, died of respiratory failure in 2007, according to a Washington Post obituary.