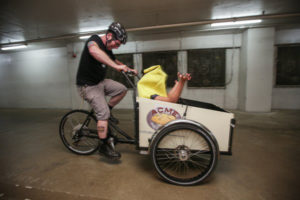 A bike race series that lets cyclists pedal through an underground parking garage has started up again in Crystal City.

The “Wednesday Night Spins” indoor race series held its first match of the year on March 1, according to the event’s organizers.

Though last year’s races were held at the complex at 2345 Crystal Drive, this year’s events are taking place on the G3 and G4 level of the parking garage at 201 12th Street S.

“Wednesday Night Spins hosts races for elites and amateurs with participants in each category competing for weekly prizes and points in pursuit of the Series Title,” the Crystal City BID said on its website.

According to the BID, the races last approximately 35 minutes and take place every Wednesday in March from 6-9 p.m. Each night’s schedule is as follows:

On the final evening of the series, organizers will combine the beginner and open races and add three more competitions: the “Anything Goes Race,” “Feds Vs. Contractors,” and the “Fixed-Gear Finale.”

Cyclists who want to participate in any of the scheduled races can sign up online. Registration is generally $15 per race, though some are more or less, depending on the match.

The race is free for spectators, who will have access to a wine and beer garden in the building’s lounge.