Do you have a favorite style of beer? Are you ga ga for goses? Are you insane for India Pale Lagers? What would happen if they all just disappeared?

This is the bleak future that might be ahead for black IPAs if recent line up changes at some major craft breweries and the article in the March 2017 issue of All About Beer — “Are Dark Days Ahead for Black IPAs?” — are any indication. According to data cited in the article, from research firm IRI, black IPAs are the only sub-style of IPAs that managed to lose market share from 2014 to 2016.

Perhaps the first, and largest shot across the bow of the black IPA was in January of 2015 when Stone Brewing Company ceased production of its Sublimely Self Righteous black IPA because of flagging demand. Nearly a year later, Firestone Walker put its Wookey Jack black rye IPA in moth balls to make way for more innovative styles. Like canaries in the coal mine of craft beer, the demise of these beers just might signal to any of the other thousands of breweries across America that black IPAs are bad for business.

But… But, I love them. I thoroughly enjoy a black IPA’s beguiling blend of roasted malt and hops. Like a well roasted coffee, they have both the light and the dark in one glass. They’re not juice bombs or tropical fruit pale ales, but they’re not porters or stouts either. They’re wonderful enigmas.

That enigma is probably what’s sealed their fate. Brewers can’t even agree on what to call them — I think that makes a huge difference. Some breweries call them Cascadian Dark Ales and some just call them Black American Ales. David Birks, General Manager of Downtown Crown Wine & Beer, related an anecdote about a local brewer who actually said that he’d sooner brew a hoppy porter than a black IPA. Before anyone pulls out their BJCP Styles to correct me, I maintain that whatever nuances there are between all these styles — hops and black malt are going to make a black IPA. Let’s just call it what it is. If another label is more sellable, fine.

The point is, there was no unified front. Now there’s almost no front to speak of. When I went to pick up the beer for this article I could only find two still on the shelves. Neither was “fresh.” One of them, Uinta’s Dubhe was already featured in an article from last Fall. So I grabbed a sixer of the other: 21st Amendment’s Back in Black. Below I give my thoughts on one of the holdouts in this fading category and repost some past thoughts on other black IPAs, including the defunct Wookey Jack. Enjoy. And do give this style a try. Lack of interest made it fade away, but increased interest can bring it back. 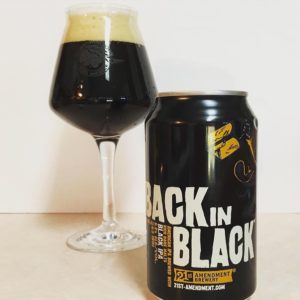 21st Amendment Back in Black black IPA (6.8% ABV) from this week
An American-style IPA — in the classic sense — with a diverse grain bill that includes black malt… duh. You know what, looking at my tasting notes they either look pretentious or unappealing. Maybe both. I love this beer — so take my comments with a dose of hops. I don’t talk enough about the appearance of beers, but it’s so important with this style. BiB pours clear and cola colored until the head begins to form and it’s suddenly black with a creamy, if thin head. Inhaling deep I get a complicated aroma that includes Dove soap, brown rice, herbs de Provence and charred wood. My sip was no less challenging, but fortunately that soapy smell resolves into a slightly spicy cardamom with cilantro and espresso. The finish is delightfully bitter and brought to mind hazelnut skin. Find some, it’s great for any occasion.

Firestone Walker Wookey Jack Black Rye IPA (8.3% ABV) from 10/17/14
This toasty black rye IPA won the Great American Beer Festival gold medal for black ales in 2012 and 2013. The rye spice is downplayed as are the hops in favor of the dark roast dryness of the black malt. This is a complex beer that unlocks its rye and hop flavors as it warms in the glass. The sourness, albeit very mild, that can come with using rye is present here. It’s a treat.

Paper Tiger Black IPA (7.1% ABV) from 09/04/15
Recently, I have come to really appreciate the complexity in bitterness that a black IPA can bring. You have the obvious bittering from the hops (it is an IPA, after all), but then you get a different kind of bitterness from the black patent malt. The black malt brings a charred quality, the backbone of the chocolate or coffee flavor found in a traditional stout. Ocelot’s black IPA did not disappoint with it’s own complex aroma — there was the char, almost charred steak, but there was also a cumin-like spice and pine (both likely products of the hops). The flavor, though two-part, was more straightforward — bittering came from both the malt and the hops. This was very drinkable despite it’s bitterness and it’s alcohol content. It was also a table favorite.

Uinta Brewing Company Dubhe Imperial Black IPA (9.2% ABV) from 10/21/16
Uinta’s year-round black IPA made a modest change from its previous look. Dubhe’s previous label featured a nighttime scene in a Monument Valley-like setting featuring the name swooping underneath the mountains. Now, the setting is the same, but at twilight as the smallest amount of orange light remains on the horizon. In the foreground is a red VW bus, which sits directly above the name, which is now set in a condensed sans serif typeface that appears hand drawn like the illustration above. Shining brightly in the dark sky is the official star of Utah, Dubhe, which makes up part of the big dipper.

Dubhe pours stout black with a rich, creamy head. Between the appearance and the aroma, which balances black coffee and cocoa with the cardamom sharpness of pine sap, you’d be excused for confusing it with a spiced Turkish coffee. This beer is appropriately sweet, thanks to the alcohol, but the dark roasted malt combines with the dank hops to create a richly flavored beer that evokes the spiced coffee that is hinted at in the aroma. Black IPAs are one of my favorite emerging categories and this beer is regularly a go-to for me.

Do you have a style that is disappearing or is already a thing of the past? Or, better yet, do you know of any black IPAs that are still in production? Comment below.

Wait! I’d be remiss if I didn’t mention one of my favorite, if draft-only, black IPAs from Port City — Long Black Veil.