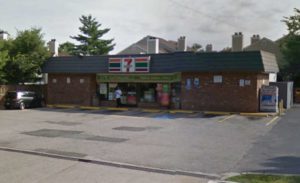 A convenience store was robbed in the Shirlington area Wednesday night.

The 7-Eleven at 2815 S. Wakefield Street was robbed by a group of three suspects, one of whom had a gun, according to police. No one was hurt during the robbery.

The same store, located down the hill from the Fairlington neighborhood, was robbed by a pair of suspects in October 2015.