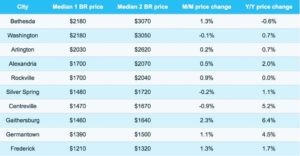 Rents in Arlington continue to increase, but at a relative crawl, according to new data.

The median 1 bedroom monthly rent in Arlington was $2,030, while the median 2 bedroom rent was $2,620, according to rental website Apartment List. That’s a 0.7 percent increase compared to March 2016 and the same year-over-year rate of increase as the District, where 2 bedroom rent was $3,050.

The good news for Arlington: the county is top-rated nationally for renter satisfaction.

Arlington received a D ranking for affordability, C- for schools and C for taxes, according to Apartment List.