I’ve been listening to the soundtrack to the musical “Hamilton” on repeat for the last two weeks. In the third song, “My Shot,” Alexander Hamilton’s friend John Laurens boasts that he’s on his third Sam Adams. Then I listened to Samuel Adams founder Jim Koch tell his own story on NPR’s How I Built This podcast.

It made me start thinking that maybe I should take another look at this venerable craft brewery. Samuel Adams’ Boston Beer Company may not have existed before the mid-80s — that’s 1980s of course — but they were among the founding fathers of modern craft brewing.

I know what you’re thinking: Sam Adams feels ubiquitous — often they are the only craft beer option on tap at national chains. For the craft beer connoisseur, there’s little to be excited about in their unsurprising offerings. Despite their forays into West Coast IPAs (a bit behind the curve) with the Rebel series of IPAs, their beers are seen as also-ran.

Another key stipulation of being a craft brewery is that less than 25 percent of the craft brewery can be owned by a company that is not a craft brewery. Samuel Adams’ parent company, Boston Beer Company, meets all the basic criteria. To put this in perspective, Anheuser-Busch brews more than 100 brands in the U.S. alone.

Sam Adams may be the second largest craft brewery in America now, but they were one of the first craft breweries to capture the imagination of American beer drinkers. The origin story, which Jim Koch vividly recounts on the podcast, sounds like the story of American craft beer.

So, I started thinking: What if I’m wrong about Sam Adams? What if we all are? For instance, I’d recently written about their Oktoberfest and how it’s exemplary of the style. I decided I had to try again and see for myself. I selected three recent releases and gave them a fresh look. I wasn’t disappointed. 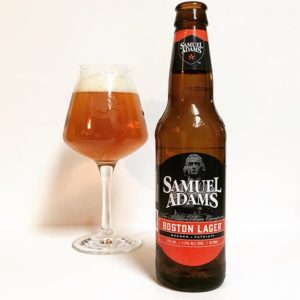 This is a classic, a relic of another time. Boston Lager won the Best Beer in America at the 1985 Great American Beer Festival. It’s easy to see how. Today, in a sea of local nano brews rather than macro brews, it might seem less adventurous.

Sometimes a beer is an experience, but sometimes it’s just a beer. That’s when a simple, tasty brew like this really hits the spot.

Amber in color — more like a Munich lager than the more common pilsner style — it smells like honey and Wheaties. Each sip is sweet and malt-balanced, definitely a beer from a time when hops were an accent and not main contenders. In fact, the use of old world noble hops from Germany suggests a nod to tradition rather than a reach into the future.

Even if this isn’t where the hottest beers are going, it’s refreshing to know that there’s still a solid and delicious lager just about anywhere you buy beer. 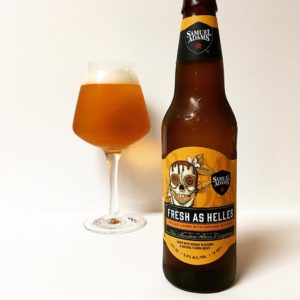 This lager looks and tastes more like the beer that Americans have known as lager. Inhaling deep, I got soda crackers dipped in clover honey. In the mouth it’s crisp and honey flavored without being too sweet.

Typical of a light colored lager, the sip is brief but full flavored. I didn’t get much of anything from the orange blossom, but this beer was so enjoyable that I was fine with that. This a great one to have in your beer fridge when the days get warmer and you just want to chill. 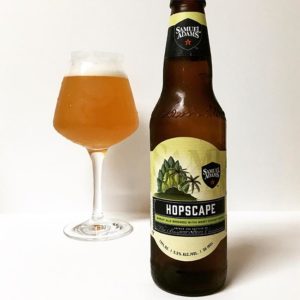 I’ve had this twice now. Once on tap — I think that bar might want to clean their lines — and once from the bottle. The bottle wins, hands down.

Hopscape was the most complex beer I tasted from Samuel Adams and it’s very tasty. The aroma was an enticing blend of roses, honeydew melon and biscuits.

That melon carries through in the flavor — more musky cantaloupe than honeydew — along with a slight sweetness and a subtle malt backbone.

Though not a wheat beer in the style of a hefeweizen, Hopscape has a typically effervescent mouthfeel. Altogether, this fragrant, flavorful beer satisfies. It’s just subtle enough to feel like it belongs in the Samuel Adams lineup without being too old fashioned.

Do you have a secret (or not-so-secret) favorite from Sam Adams?