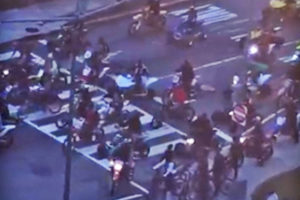 This is the third consecutive year the riders have caused a stir. Past incidents sometimes have included more than 100 riders.

The first incident took place around midnight on Saturday. A witness reported in a tweet that more than a dozen riders drove the wrong way on the Key Bridge on their way into Arlington, and police followed.

Arlington County police say they were notified of the approaching group by Metropolitan Police around midnight Saturday. The riders traveled through Rosslyn onto westbound Route 50, worked their way south to Army Navy Drive, then turned back north on I-395 and re-entered the District at 12:12 a.m., according to ACPD.

The second incident happened around 7 p.m. on Sunday when an Arlington police officer patrolling the 1200 block of N. Courthouse Road spotted a group of about 75 dirt bikes and ATVs driving on Arlington Blvd. They traveled to Route 1 and south into Alexandria.

Police say that during both occurrences they monitored the group of riders and maintained a rolling roadblock to keep pedestrians and motorists safe.

State law prohibits the operation of ATVs on public highways. An ACPD spokesperson says the drivers in question operate the vehicles without considering the care and safety of others; they have been seen locally traveling at high rates of speed, veering into oncoming traffic and driving on sidewalks. Police are investigating the incidents to identify those involved.

Several law enforcement authorities in the region report that they’re aggressively working together on a solution. Last April, they held a joint press conference regarding ATV operation on area roadways. Metropolitan Police offer a reward of $250 for information leading to the identification of suspects in these incidents.

Anyone who sees ATVs operating in Arlington County — or who knows the identity of someone riding the vehicles on county roads — is encouraged to call the police non-emergency number at 703-558-2222. Information can also be provided anonymously to Arlington County Crime Solvers at 1-866-411-TIPS.