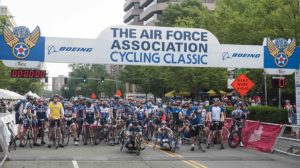 Arlington will again be alive with the sound of thousands of pedaling cyclists, as the Armed Forces Cycling Classic returns in June.

Previously known as the Air Force Association Cycling Classic, the event will celebrate its 20th anniversary when it takes place on June 10 and 11.

Presented by The Boeing Company, the event benefits members of the U.S. armed forces.

“For two decades, the Cycling Classic has paid tribute to the men and women in uniform who serve courageously to protect America at home and around the world,” said Boeing chairman, president and CEO Dennis Muilenburg in a statement. “Throughout our 100-year history, Boeing has a proud tradition of partnering with the U.S. military, and we’re honored to support this year’s event, which benefits active-duty and retired veterans and their families.”

The weekend begins with the Clarendon Cup, in the heart of Clarendon. The following day, the Challenge Ride offers a closed course to cycling enthusiasts of all abilities in and around the Pentagon, Crystal City and the Air Force Memorial.

The race for the Crystal Cup follows on Sunday in Crystal City, pitting professional and amateur racers from around the world in a series of races. Free races for children aged 9 and under also will be held both days, in addition to the lifestyle and sponsor expo.

“We’re proud to celebrate our involvement with the Armed Forces Cycling Classic,” said Angela Fox, president and CEO of the Crystal City Business Improvement District, in a statement. “Over the past decade, we’ve watched both the professional races and community Challenge Rides grow while providing an exciting and transformative experience for participants and spectators alike.”