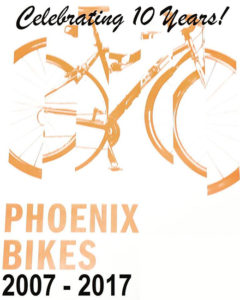 It promises to be a busy few months for local nonprofit Phoenix Bikes as it celebrates 10 years since its founding.

The organization — which lists its mission as promoting bicycling, building community and educating young people — marks its 10-year anniversary today.

It will celebrate on Thursday night from 6:30 p.m. with its Makers’ Ball at 1750 Crystal Drive. The evening will include music, food, drink, an auction of art and other hand-made craft, a bicycle showcase and more.

Later this year, Phoenix Bikes will take center stage once again as it hosts this year’s Youth Bike Summit on October 6-8 at the Hyatt Regency Crystal City.

The summit is geared toward youth, bikes, education, advocacy and leadership, and it features a number of workshops and seminars as well as keynote speakers and networking.

“By creating a space where voices of all bicyclists can be heard, the Youth Bike Summit fosters an inclusive national dialogue that addresses the issues, rights, and concerns of all bicyclists,” Phoenix Bikes posted on its website. 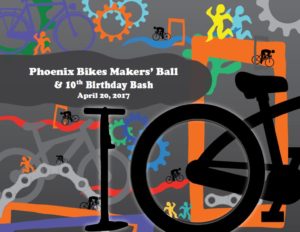 Phoenix Bikes currently is located in Barcroft Park, where it provides its community bike shop to help recycle, mend and repurpose used bicycles. But before the end of the year, the organization will relocate to the ground floor of the Arlington Mill Community Center. Such a move has supporters very excited.

“It is an exciting step for Phoenix Bikes, the youth they serve and our Arlington community,” County Board member Libby Garvey, also a Phoenix Bikes board member, wrote in an email to supporters.