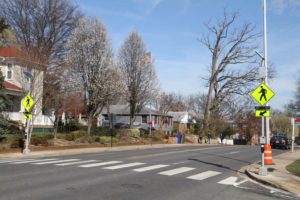 No new projects to improve pedestrian safety — such as sidewalk fixes or streetlight installations — will be approved until at least December after a vote last week by a citizen committee.

The Neighborhood Conservation Advisory Committee voted April 13 to suspend its spring funding round due to “anticipated increases in construction costs for projects that have already been approved by the County Board,” neighborhood conservation program coordinator Tim McIntosh said in an email.

The NCAC’s decision does not affect existing projects already approved by the County Board. McIntosh said design work and construction on several plans will continue this year, but that the committee “wanted to reserve a portion of its 2016 bond to cover any cost overruns which may occur later this year for projects going out for competitive bid.”

“The focus will be on continuing design work for approved projects and making sure sufficient funding is on hand to complete them prior to approving new ones,” McIntosh said.

In an email, an anonymous tipster was critical of the NCAC approvals process and said more must be done to help improve pedestrian safety.

“Clearly, the NCAC system isn’t working as a method to help improve pedestrian safety,” the tipster wrote. “These projects are getting conflated with beautification projects and are now shut down due to poor project controls. The queue of vital pedestrian safety projects, many in the NCAC process for years already (projects that have neighborhood endorsement) is growing rapidly as Arlington traffic increases and there is now no way to address these problems.”

McIntosh said no decision has been made about the fall round of funding, set to be voted on in December.

“[Neighborhood Conservation] staff and the NCAC will evaluate whether or not to have the December funding round later this year,” he said.