Three notches, like small slashes, mark both an historic road running east/west through Central Virginia and an accomplished Charlottesville brewery. Three Notch’d Brewing Company takes its name and its trademark from the road of the same name. But it also takes its inspiration from it and its historical surroundings, naming most of its beers after places, events and artifacts of the local past.

Opened in 2013, this relatively young Virginia brewery has already managed to “make its mark.” With three locations from Charlottesville to Richmond and a national award — Hydraulion Red won the bronze in the Irish-Style Red Ale category at the 2014 Great American Beer Festival — Three Notch’d appears to be striking the balance between growth and relevance well.

RVA Collab House is their most recent location to open and is located in the historic district of Scott’s Addition in Richmond. In addition to a taproom, Three Notch’d installed a 3.5-barrel brew system that they use to collaborate with breweries, local businesses and other organizations.

Between their core beers, which are solid entries in their respective style; their seasonal releases that show up on Instagram and Untappd; and their small-batch collaborations Three Notch’d can appeal to both the casual beer drinker and the beer geek alike.

On Friday, April 28, Three Notch’d will be releasing some new beers and taking over the taps at Dominion Wine & Beer from 5-8 p.m. In addition to six-packs of Hydraulion Red Ale, 40 Mile IPA, The Ghost Pale Ale, G IV IPA and Minute Man IPA, the following beers will be on tap:

Below are my thoughts on three of the releases available from Three Notch’d. 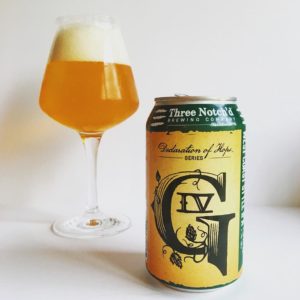 The historical reference here is one that strikes close to home for the brewery — it’s named after the founder’s father, George Henry Kastendike IV or Big G4. The brewers claim that this bold West Coast IPA is reminiscent of the way Big G4 lived. What a life!

Inhaling the aroma, I get peach nectar and citrus zest with just a hint of pine. The flavor is equally bold — bolder — with grapefruit tang and bitterness, a combination of the pith and flesh. It starts out sweet, but quickly turns bitter and dry. The slight dankness suggested by the hint of pine in the aroma peeks through mid-sip, but doesn’t linger or overpower. The current trend may be toward cloudy New England IPAs, but this fruit-forward beer stands along side the trendy ones in flavor. 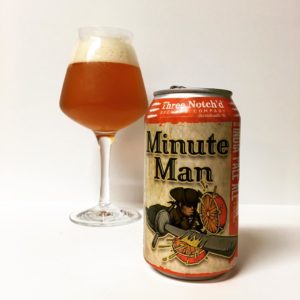 The can’s art evokes both Minute Maid orange juice and the historical volunteer-based militia Minutemen. Orange juice is the main thing here. I detected orange juice concentrate, Nilla wafer and pine resin in the aroma. Not bitter at all — the 20 IBUs tell you that — the sip is sweet and dank with a juicy finish.

I was surprised that the orange didn’t dominate the flavor in the same way that it did the aroma, but I think that’s for the better. So many fruit-forward IPAs focus solely on citrus flavors, but I appreciate how this one had the extra dimension of pine. The sweetness makes is tasty without becoming cloying.

Named after the only fire engine that the University of Virginia’s first fire department owned, Hydraulion is a tribute to Three Notch’d Brewing’s hometown. It’s also like a bit of history itself. Eschewing the hoppy ambers and reds of today, Three Notch’d has made a malt-balanced red ale, truly in the Irish tradition.

The addition of the English Golding hops, rather than an American variety means that the hops will be more subtle. Though this beer does not lack hop bitterness altogether, it is definitely not pronounced. What you get, instead, is a tasty malty brew that is pleasantly offset by a slight hop bitterness around the edges. You can’t go wrong with this 2014 Great American Beer Festival Bronze medal winner for Irish-style ales.

Come down to Dominion Wine & Beer to check out Three Notch’d next Friday. Cheers!