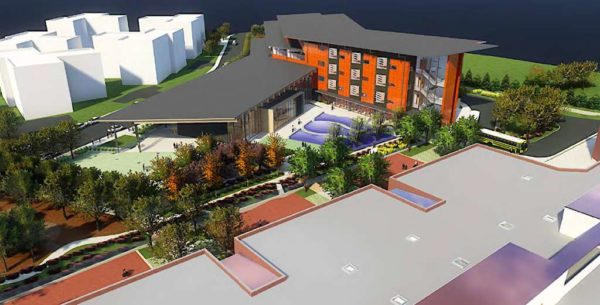 Parents and community members are being asked to help choose the name of the new elementary school that’s being built next to Thomas Jefferson Middle School.

A naming committee has narrowed down the choices, which included suggestions submitted via an online survey, to five. The finalists, each with an explanation from the naming committee, are below.

The new school is expected to open in September 2019. Students and staff will be moving from the existing Patrick Henry Elementary, near the Columbia Pike Branch Library, to the new school.

The naming committee says it received input on both sides of the debate over the current school’s name.

The committee heard compelling arguments both for keeping and for changing the name of the school. Some felt that keeping the name would provide continuity and maintain a connection to the school’s history, while continuing to honor one of our nation’s founding fathers. Others thought that the school name should be changed in order to avoid confusion between the new and existing school, or to reflect the creative design of the new building. Some also felt that Patrick Henry’s name should no longer be used since he owned slaves.

The committee says it received more than 500 survey responses via its online form. Among the serious suggestions were at least a few from pranksters, we’re told; other name suggestions included Howard Stern Elementary and Pokemon Elementary.

This time around, the committee is hoping to only receive input from Patrick Henry Elementary and Jefferson Middle School parents, students, staff and nearby neighbors.