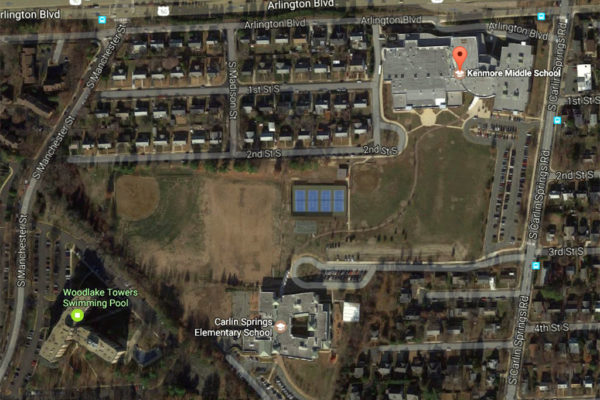 Just days after local parents launched a petition favoring building a high school next to Kenmore Middle School, others have begun a petition of their own against the plan.

The petition against the Kenmore plan raises concerns about the impact on traffic on S. Carlin Springs Road, which it says would increase the number of students that attend nearby schools from 2,200 to approximately 3,500.

The School Board recently whittled down a list of nine possible sites for the county’s new public high school to three. Under the Kenmore plan the current middle school would remain on the 33-acre campus, and adjacent property would be used to build a new 1,300-seat high school.

The other two options remaining are to develop a ninth-grade academy on the site of the Education Center next to Washington-Lee High School, with the International Baccalaureate program expanded and a World Languages site created, or build at the Arlington Career Center site to co-locate with Arlington Tech.

The petition was also critical of the process to determine the site of the new high school.

“The planning process by the County and the School Board to engage in more proactive planning is appreciated,” it reads, “but it appears that the effort to site the 1,300 [seat] high school seats is short circuiting the process.”

Another School Board work session is scheduled for May 15 at the Education Center, with the Board set to discuss the options and adopt one in June.