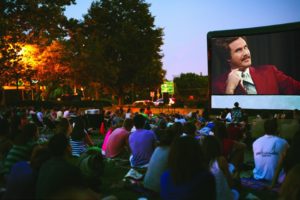 Rosslyn’s annual outdoor summer cinema series is set to kick off one month from now.

There will be food trucks on site to serve dinner and popcorn, while a “Pub in the Park” will offer beer, wine, mocktails and movie-themed cocktails. On five nights — June 2, June 16, July 7, July 28 and Aug. 18 — a DJ will perform before the film.

The films generally start shortly after sundown. The event is sponsored by the Rosslyn Business Improvement District.

Another local BID, Crystal City, decided to discontinue its usual summer movie nights this year, citing a crowded marketplace of similar events around the area.