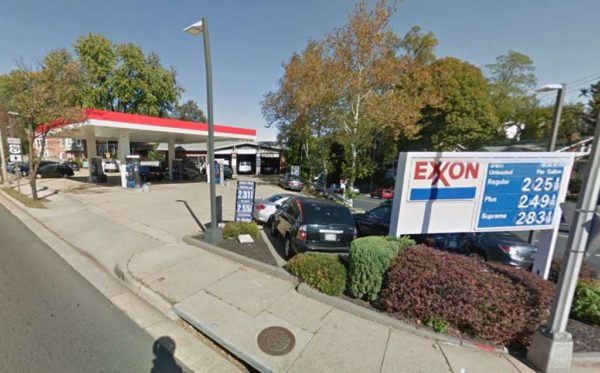 Arlington’s Cherrydale neighborhood appears to be the latest target of the skimmer scammers.

Maywood listserv lighting up with reports of multiple people getting their credit cards skimmed recently. Most people point to common thread of Liberty Gas station on Lee Highway (and a few other likely places in the area) as common thread. But that is not 100% clear.

In most cases, someone buys gas here. Later someone tries to purchase gas in California. Per Cherrydale listserv earlier, it looks like Arlington Police already found a “skimmer” machine earlier at Exxon across the street, but these are new reports from another potential location.

Here’s what she said via email to ARLnow.com:

Our Financial Crimes Unit received reports of possible credit card skimming at the Liberty Gas station. They responded to the area and during their investigation did not identify a point of compromise at this location. On March 9 at approximately 1:57 p.m., police responded to the Exxon gas station in the 4000 block of Old Dominion Drive for the report of a recovered credit card skimmer. That investigation is ongoing.

These type of cases are typically reported to police as credit card fraud and since we use credit cards for almost all purchases (online, in person, groceries, gas, etc.) the challenge is identifying the point of compromise. Turnaround time from point of compromise to first fraudulent use varies depending on how the suspects intend to use the stolen data. Police work closely with banking institutes who notify us when there is a trend with customers cards being compromised and they identify the location all the cards have in common.

There are some things citizens can do to protect themselves: