This biweekly column is sponsored by the Arlington Office of Emergency Management.

If your answer to the headline was heat and drought emergencies — you’re right! And we’ll address that a little later this summer. But let’s drill down to the second and third deadliest weather hazards for a moment: tornadoes and lightning.

We’re entering the season when it seems like we have almost daily thunderstorms, and it can feel like Arlington Alert is notifying you of so many severe weather watches and warnings, you almost stop paying attention. Here’s why you shouldn’t:

What is a Severe Thunderstorm?

A severe thunderstorm is any storm that produces hail at least 1 inch or larger, or wind that is 58mph or higher. Don’t be fooled by the definition — softball-size hail and winds over 100mph have been reported with severe thunderstorms. 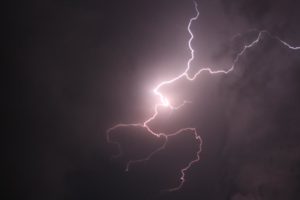 Lightning strikes the U.S. 25 million times a year, killing an average of 49 people and injuring hundreds.

Seventy percent of strikes occur during the summer months, and a majority of deaths occur in males, and in people who are outdoors enjoying leisure or sporting activities, like fishing, camping, boating, yard work and beach-going. Many victims of lightning strike were either headed to safety, or just steps away when they were struck.

Tornadoes can, and do, accompany severe thunderstorms 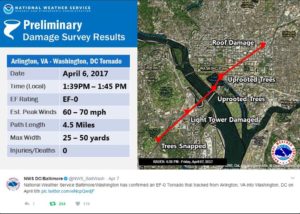 We tend to think of tornadoes as a weather hazard the southern part of the state has to deal with. But as we saw earlier this year, tornadoes are a very real threat of severe thunderstorms. Three tornadoes sprouted from a severe thunderstorm on April 6, injuring one person here in Arlington, and causing damage in Herndon and Arlington as well as in Washington, D.C.

In the April tornadoes, the National Weather Service did not classify the event as a tornado until the next day, so only a Severe Thunderstorm Warning was sent out. This makes it even more important to take every severe thunderstorm warning seriously. 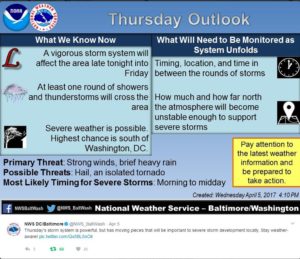 Follow these tips to keep you and your family safe during a severe thunderstorm: