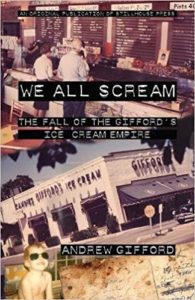 Last month Gifford released his first book, “We All Scream: The Rise and Fall of the Gifford’s Ice Cream Empire.“ The book depicts Gifford’s abusive relationship with his parents growing up, the deaths of his grandparents and how his father ruined Washington’s largest ice cream empire.

When Robert Gifford, one of John Gifford’s other sons, took over the company, things quickly went downhill. Gifford described his father’s actions during the reading, explaining how he would never pay his taxes, cheated his customers and didn’t pay employees, ultimately leaving the company in financial ruin.

Despite the collapse, many local residents still remember Gifford’s fondly. And that means the brand is still valuable.

“It doesn’t matter what’s in the cup,” a person trying to reboot the company said last year, according to Gifford. “As long as I say it’s Gifford’s Swiss Chocolate, people will pay me anything I ask.”

“It’s these people who are so focused on this fantasy and nostalgia that frustrate me,” said Gifford. “I want the lesson to be nostalgia is dangerous, don’t give into it. Don’t buy $6 ice cream from someone who said they once bought machines from the people who once supplied Gifford’s 50 years ago.” 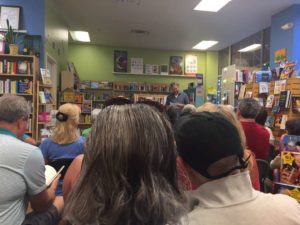 Gifford was at One More Page Books in Arlington’s East Falls Church neighborhood earlier this week, where he read two excerpts from his book, held a Q&A session and signed copies.

In the excerpt Gifford read during the event, he described how his mother decided to sit him down at the age of 6 and tell him that his grandmother was murdered by his grandfather. This was a lie: his grandmother had passed several years beforehand, but Gifford had been told she was still alive during his entire childhood.

“We All Scream” made an impression on members of the audience, most of whom grew up in the area and had warm memories of Gifford’s Ice Cream.

During the Q&A session, many questions were about what happened to the old Gifford’s ice cream flavors and recipes people adored, and if anyone could find any remaining Gifford’s products. Instead of focusing on the horror and abuse around the Gifford story, the questions were full of yearning and nostalgia.

“This was a beautiful thing that people loved but it needs to die,” said Gifford after the event. “It needs to end. There’s this obsession with the Gifford’s of old, when really it wasn’t that fairytale.”