Those three words were the catalyst for two-week old Solace Brewing Company’s name. Co-founder Jon Humerick woke up in the wee hours one night in the months leading up to the opening of his new brewery. Find. Your. Solace. He shared it with his partners immediately, and the rest is history.

Now the Dulles brewery that Jon, and partners Drew Wiles and Mike Arms brought to life is open and bearing the inspiring name. I had an opportunity to visit Solace a week after they opened and sit down with Jon Humerick to sample their brews and learn a bit about Loudoun County’s newest craft brewery.

Jon and Drew met at Beltway Brewing Company, the Sterling contract brewer where Jon was director of operations and Drew was production manager. After years of brewing beers for others, the idea of doing it themselves began to ferment. Then in December of 2016 they broke ground on their own brewery. 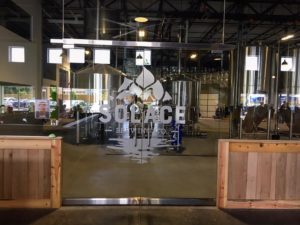 Capable of brewing 3,000-4,000 barrels annually, Solace is currently a draft-only brewery, with pours on premises and growler fills. They look forward to offering crowlers soon, as they have the machine, but are waiting for the cans. Even further into the near future, they will use a mobile canning system to can some of their beers.

Once Solace has established itself, it plans on being a force for good — partnering with local charities to brew collaborative beers and donate proceeds. For the time being, the crew at Solace are happy to entertain their neighbors. The space is enormous and designed similar to good friends Ocelot Brewing Company who are just down the road.

There’s a bar on one side and a large seating area that will comfortably accommodate large crowds of both beer geeks and families on the other. In fact, the seating area is separated by a low wall that makes for a nice corral for families with small children.

Speaking of beer geeks, I don’t get the sense that Solace is trying to be the next “line-around-the-corner” brewery. Their aim is to brew beers they like for others to enjoy.

Just look at their opening line up: an India Pale Lager brewed with Ocelot Brewing Company, a brown ale, a watermelon summer ale, a wheat beer, a session IPA, and an IPA. Approachable. Even better, they have, on limited offering, coffee on nitro from Commonwealth Joe Coffee Roasters for the designated driver. If they’ve run out of the coffee, you can always get a flavored seltzer water — a welcome change from the beer or canned soda choices of other local breweries.

I sampled all of their starting line up. What variety! While each of Solace’s first beers was interesting, three stood out to me as a great sign of where they might go. 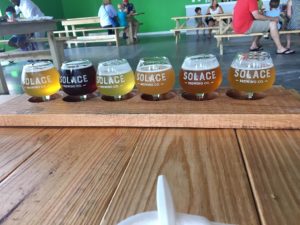 A more accurate description of this beer would perhaps read “brewed by Ocelot.” Though a collaboration and among Solace’s first beers, this beer was brewed and lagered at Ocelot Brewing Company, which is down the road and around the corner.

The old friends — their relationship pre-dates Ocelot — had previously agreed to work together on one of their first beers. It’s appropriate that one of Solace’s inaugural beers is a collaboration, since they intend to make this practice a common one down the road.

Just how is this one, though? It pours a greenish straw color and clear with an aroma that blends pine needles and orange rind. Curious. Crisp and citrusy, the lager has a quick sip that has a big flavor up front that doesn’t linger. Let it warm slightly and you’ll get the briefest hint of saltines. I could almost imagine that I was drinking this from a red Solo cup next to a pool, which is just about right.

When I was a kid, I had a camp counselor who said that a rock band was nothing if they couldn’t make a good ballad. I think this is questionable logic, but this reminds me of my own feeling: a brewery should be able to make a good brown ale.

The workhorse of craft beer, the mostly malty brown ale, has been a staple of American craft brewing for decades. Brown Bomber has the makings of a flagship beer. It’s simple — think an aroma of wheat bread — and also novel — both sweet and bitter as it makes use of flavorful American hops. Remember when I said that Solace is aiming for approachable? This brown ale welcomes you with open arms and invites you to stay.

First of all, no one uses the moniker “session” these days, but don’t stop. Why come up with a new name for something that already had a fine one? This is a beer that you can enjoy more of in a sitting. It’s also one of the tastiest session IPAs I’ve ever had.

Inhaling conjures up a whole pastiche of summer fun — fresh-cut grass and bright citrus and a hint of pine. But on the tongue, this beer delightfully dank and grapefruity with little bitterness. Nothing indicates that you’re not drinking a stronger beer. The food truck that day was a BBQ truck — Suns Out Hops Out paired perfectly with the slightly peppery and vinegary pulled pork I had.

I just wrote about three of the six beers that Solace opened with. That means that I didn’t write about beers like 2 Legit 2 Wit, a solid wheat ale with a fantastic name. And they’re already on to the next thing. Their next beer will be an IPA brewed by lead brewer, Bridgette Turner, followed by a double IPA and a stout. According to their Facebook page, they also plan to do a little barrel aging. Have you found your Solace?