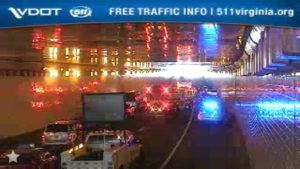 Units from the Arlington County Fire Department responded to the scene under Rosslyn Gateway Park with Virginia State Police just after 3:30 p.m after reports of the crash.

Three patients were transported to the hospital with injuries, according to scanner traffic.

Officers and crews from the Virginia Department of Transportation blocked all lanes of westbound I-66 and diverted traffic in the area onto Lee Highway. Delays are likely to continue into the evening rush hour, although police said they will look to reopen one westbound lane soon.

#Rosslyn WB I-66 traffic diverted onto Lee Hwy, Exit 73 for a crash in the Rosslyn Tunnel #vatraffic #dctraffic https://t.co/nb3VFR1abs