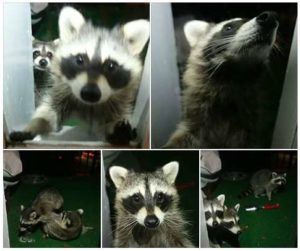 A Fairlington woman was attacked by a raccoon last week, causing a loss of blood, requiring 87 stitches and prompting a neighborhood-wide debate about Fairlington’s trash policies.

The attack happened Wednesday night as the woman was on her patio with her dog. A neighbor described the woman “screaming and flailing around,” then “spraying down the blood stains on her patio” the next day, with a bandaged foot and arm.

Rather than using trash cans, condo association rules call for Fairlington residents to put trash bags out in front of their buildings in the mornings, for pick up 6 days a week. The trash is picked up later in the morning, but often after birds, squirrels and other critters (rarely raccoons, which are nocturnal) start clawing at the food inside the bags, spreading the contents on the ground. And that’s not to mention the times when residents heading out of town or simply flaunting condo rules will put trash out at night, an almost sure-fire way to ensure wildlife gets to it before the trash collectors.

“The Arlington Animal Welfare League says they will not attempt to remove the raccoon because there is an underlying problem in our neighborhood related to the trash,” said a neighbor of the woman who was attacked last week, in a widely-discussed Facebook post. “No other part of Arlington has as many raccoons as our lovely Fairlington. To address the problem, the Head of Animal Control suggested closed trash cans that could still be picked up daily, and could be tasteful and wooden and raccoon proof.”

“I think this is something we should advocate for,” the neighbor continued. “Until the trash situation is sorted out, the raccoon population will remain high, most likely leading to more attacks.” 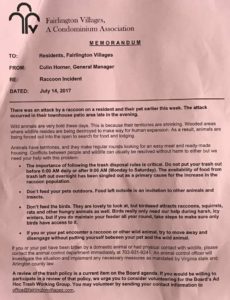 In a letter from the Fairlington Villages condominium association, one of several in the larger Fairlington neighborhood, general manager Colin Horner blamed habitat loss and said residents should not feed birds nor feed their pets outside.

“Wild animals are very bold these days. This is because their territories are shrinking,” Horner wrote. “Wooded areas where wildlife resides are being destroyed to make way for human expansion. As a result, animals are being forced out into the open to search for food and lodging.”

Horner urged residents to only put out trash between 6-9 a.m., saying that “the availability of food from trash left out overnight has been singled out as a primary cause for the increase in the raccoon population,” but added that “a review of the trash policy is a current item on the Board agenda.”

The Animal Welfare League of Arlington, meanwhile, said it is “actively managing this case.”

“Animal control officers were unable to the locate the suspect raccoon,” said Chief Animal Control Officer Jennifer Toussaint. “We are actively managing this case and ask that anyone with direct knowledge relating to this incident or anyone who sees a raccoon acting abnormally or coming close to residences in this area contact animal control immediately at 703-931-9241.”