A bus stop, fire hydrant and sign were damaged by an errant driver in the Shirlington area this past Saturday evening.

The fire department tweeted a photo of the damage Monday, with a skull-and-crossbones above the fallen hydrant, urging drivers to “keep your wheels on the road and save our hydrants!”

Arlington County Police Department spokeswoman Ashley Savage said the driver of the striking vehicle — a Nissan Altima — was cited for the crash. 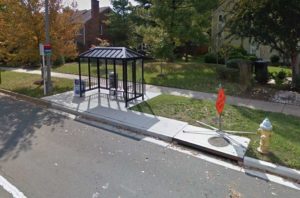 “At approximately 7:11 p.m. on July 22, police responded to a single vehicle crash in the 2500 block of S. Arlington Mill Drive,” said Savage. “The driver was traveling eastbound on S. Arlington Mill Drive when the vehicle left the roadway and collided with a bus stop, fire hydrant and light pole. The driver was cited for failure to maintain proper control of their vehicle.”

So far, there’s no exact timeframe or cost estimate for repairs.

“The bus stop is on the schedule to be fixed as soon as possible,” said Dept. of Environmental Services spokeswoman Jessica Baxter. “Crews will have to get in there and assess the damage to determine cost and timeline for repair.”