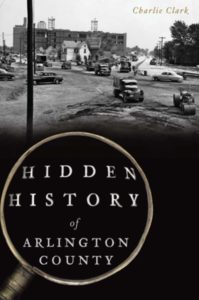 The book chronicles “forgotten stories from the nation’s smallest county,” though some stories are less forgotten than others. From the book’s description:

Arlington County, for two centuries a center for government institutions, is a vibrant part of the Washington, D.C., community. Many notable figures made their home in the area, like Supreme Court chief justice Warren Burger, General George “Blood ‘n’ Guts” Patton and a beauty queen who almost married crooner Dean Martin. The drama of Virginia’s first school integration unfolded in Arlington beginning in the late 1950s. In the 1960s, two motorcycle gangs clashed in public at a suburban shopping center. Local author, historian and “Our Man in Arlington” Charlie Clark uncovers the vivid, and hidden, history of a capital community.

With Clark’s permission, an excerpt from the book is below.

In producing my weekly “Our Man in Arlington” column for the Falls Church News-Press, I come across many juicy factoids that leap out as being, not literally hidden, but little known. Sometime to find the tidbits, I had to dig. I wouldn’t have found them all in the texts of the 80 historical signs that dot our county’s streets and landmarks (though I’d wager that those signs are not sufficiently read).

Some I found did not inspire a full essay but merited presentation as stand-alone squibs. In reading a 1955 magazine essay by Arlington-based state Del. Kathryn Stone, I stumbled on an astonishing fact: When the new Wakefield school combining junior and senior high students scheduled a PTA meeting in the gym in 1954, 2000 parents showed up!

Some finds were personal. I inherited a 1943 photo of my parents when they were dating during World War II. I knew they’d lived in Arlington but didn’t know the street. I took the black-and-white shot with its 603 house number and drove into South Arlington. Magically, when I emerged from 6th Street onto Walter Reed Drive, I stared across a courtyard and immediately recognized the exact entranceway of the Fillmore Gardens apartments still intact after 70 years. (I knocked on the door and wowed a bewildered resident with my time-travel find.)

In my reporting I get to glimpse some amazing private documents. The Washington Golf and Country Club (founded 1894), which boasts five U.S. presidents as past members, has a 1920s directory listing Woodrow Wilson with the address: The White House.

One story was once hidden but now can be told. Famed Watergate scandal reporter Bob Woodward of The Washington Post in 2005 revealed that he used to meet his highly placed source “Deep Throat” in a parking garage in Arlington’s Rosslyn neighborhood. Demand was met for erecting an historic plaque. The garage itself, however, at this writing is slated to be torn down to make way for an apartment building. Still, developer Monday Properties is preserving the sidewalk historic sign on North Nash Street.

The global Marriott hotel chain likes to report that its first motor hotel was in Arlington, the Twin Bridges Marriott built in 1957 near the 14th Street Bridge and the George Washington Memorial Parkway. It was torn down in 1990. But baby-boomer rock fans recall it as the site where Little Feat guitarist Lowell George met his end there in 1979 from a heart attack.

Last but not least, fewer and fewer Arlington old-timers recall a time when many teenagers, right after they got their driver’s license, ventured over to Speed Hill. It’s still there, hidden off Nellie Custis Drive and hugging the Potomac along the 2700 block of North Quebec Street. Many a rookie driver as far back as the 1960s tested his (parents’) speedometer on what was reputed to be the steepest hill in Arlington. I recall at one point worried authorities made it one-way–going up. Today it’s two-way street, lined by beautiful upscale homes, inhabitants of which, I was recently told, call it Death Hill. May all who experience it — and all who read these essays — travel Arlington safely. –Charlie Clark