In a position he describes as the “greatest honor of my life,” three-term Del. Alfonso Lopez (D) said he finds it most rewarding to help his constituents with issues they may be having.

Lopez said he likes to help his constituents in the 49th District with issues like wanting a new stop sign, or help with filing their taxes. And he and his staff run events such as health insurance enrollment fairs and stream cleanups.

“I do it because I love it,” Lopez said. “I love giving back, I love the opportunity to help people that I’ve never met before. To literally help change people’s lives that I don’t even know but who need help. I’m proud of the fact that with things I’ve accomplished I think I’ve done that. And I want to keep doing that.”

Lopez is the only Arlington member of the House of Delegates facing a challenge this November, against Republican Adam Roosevelt.

But the three-term delegate, whose district includes neighborhoods along Columbia Pike, around Pentagon City and west to Bailey’s Crossroads and Seven Corners in Fairfax County, said he has plenty to be proud of.

Lopez said one of his main priorities is to ensure Virginia is welcoming to immigrants, even amid some heated rhetoric and actions from some in both Washington and the General Assembly.

He said that desire to protect those people is rooted in his family history. Lopez’s father came to the United States in the 1950s from Venezuela and overstayed his tourist visa. He then worked, learned English, became a citizen and graduated from Northern Virginia Community College. His mother was a guidance counselor at Washington-Lee High School and helped more than 1,000 students get to college.

Lopez said them and a shared desire to live the American Dream are a reminder each day of the importance of helping immigrants.

“[E]very time I see a DREAMer kid, I see my father,” Lopez said. “Every time I look in the eyes of some young student trying to make a better life for themselves here, I see my dad.” 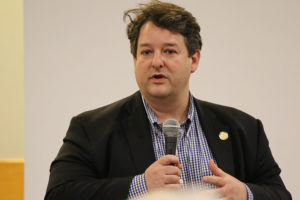 Locally, Lopez pointed to his involvement in the negotiations to keep the Virginia Dept. of Motor Vehicles office on Four Mile Run Drive open as a major way he has been able to help the community.

The office had been slated to move to Falls Church, but Lopez held a community meeting in Arlington and through negotiations with the DMV and building owner helped resolve the issue.

And he spoke of his pride at helping create the Virginia Housing Trust Fund, which helps create and preserve affordable housing and has provided loans to the likes of the Arlington Partnership for Affordable Housing.

“The reason I’m proud of it is it’s helping touch people’s lives that I’ve never met before,” Lopez said. “One of the most important moments for me was when I met a family that actually benefitted from it…[The] fact that this family was helped to have a roof over their head for themselves and their little boy meant a great deal to me.”

And as the Chief Whip of the House Democratic Caucus, Lopez has played a leading role in upholding all of Gov. Terry McAuliffe’s (D) vetoes of legislation, the most in the history of the Commonwealth.

If re-elected, Lopez said he wants to continue protecting the environment, having started that work as co-founder of the bipartisan Virginia Environment & Renewable Energy Caucus that advocates for environmental issues in Richmond. 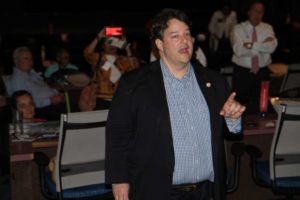 He also said he wants to keep adding jobs and growing the economy by making it easier for small businesses to open and operate, and by pushing for education reform that includes less standardized tests and less reliance on local tax revenues to fund public school districts.

Lopez echoed McAuliffe’s desire to expand Medicaid in Virginia under the Affordable Care Act, something that he said would help reduce poverty and help boost the economy and create jobs. That plan has been unsuccessful both through the General Assembly and executive action.

“I believe in a Commonwealth where we lift everyone up, and we leave no one behind,” Lopez said. “The fact is, my family was able to achieve the American Dream with the help of government, with the help of the social safety net. Everyone should have that same chance. And that’s what I fight for every day, that’s what I care about.”